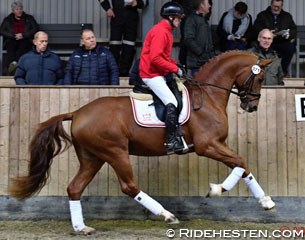 Seventeen dressage bred stallions were being tested in the dressage category but 9 of those in fact were tested in both dressage and show jumping in order to meet the German testing standards. The autumn performance test in Denmark takes 35 days and the stallions were ridden by Torben Frandsen, Michelle Hvid and Jan Moller Christensen in particular for dressage.

The high scorer of the pack was the Swedish warmblood bred Springbank II (by Skovens Rafael x De Niro), owned by Helgstrand Dressage. The chestnut stallion scored a total of 954,5 points. He did not score below 9 and even got 10 for rideability.