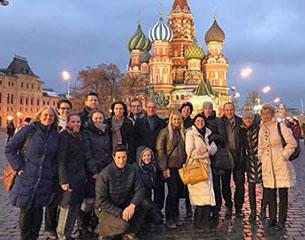 Ten judges were promoted from national to FEI 3* and from FEI 3* to 4* level following an FEI Dressage Judges course and exam held in the Maxima Park equestrian centre in Moscow (RUS) on 1-3 December 2017.

Fourteen participants from all over the world were tested on judging orally from videos, a written theory exam, a live Grand Prix of 16 horses and finally an oral exam with the Course Directors.

Four judges did not pass the exam.

Subject to approval from their National Federation, the successful participants can be promoted to the respective FEI status from 1 January 2018.