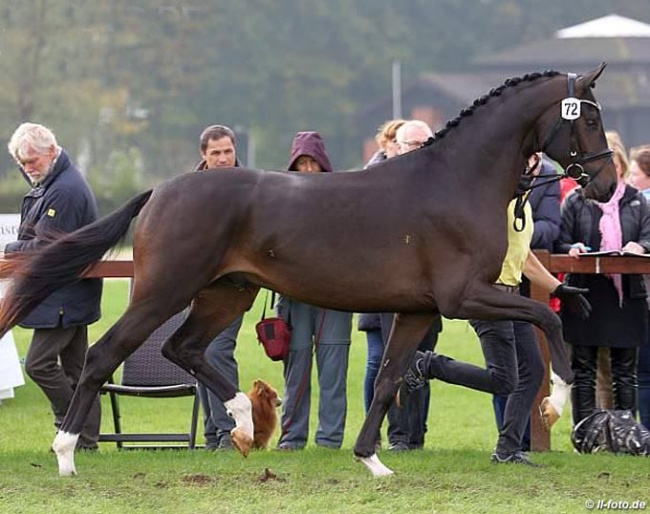 Fassianos, the For Romance x St. Moritz colt that enthused the judges, breeders and crowds at the 2017 Hanoverian Stallion Licensing in Verden, last October, will make his first public appearance at the 2018 K+K Cup Stallion Show in Munster, Germany, on Wednesday 10 January 2018.

Bred by Cornelia Gedenk and owned by Michele Widner de Pino's Exclusive Equest Inc., Fassianos became a premium stallion at the Hanoverian licensing. He stood out with his optimal body use, swing over the top line and elasticity. His ground covering gaits, shiny dark coat and correct conformation further convinced the licensing committee of his qualities as a premium stallion.

As one of the most talked about and promising young colts at the Hanoverian licensing, Fassianos is now ready for a sport and breeding, slowly moving more into the spotlight. Tobias Schult will show him at the K+K Cup stallion show as part of the group of F-line stallions.

As Fassianos will only be turning three years of age in the spring, it has been decided in the best interest of this young colt to present him in hand instead of under saddle.

American born and Spanish based owner Michele Widner del Pino is ecstatic about the future of her young colt, who is brimming with talent as a breeding stallion and dressage horse.

"I'm excited about Fassianos going to Munster. I hope many breeders will get as thrilled by him as I do. He has a wonderful personality and is such an all-round athlete," Widner del Pino told Eurodressage. "We are close to making a final decision on who will become Fassianos' rider. It is very important to us that the right person is found who connects with Fassianos and can train him according to the principles of classical dressage."

Fassianos is stationed at Tobias Schult's yard in Hünxe, Germany, for the 2018 breeding season with a stud fee of 900 euro.