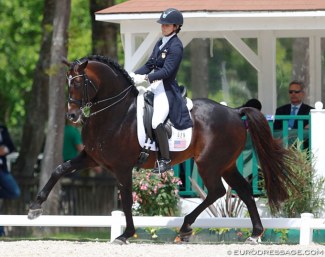 Rosevelt is bred by Henry Peters in Germany and is by Rotspon out of Lore (by Lauries Crusador xx).

He was discovered as a youngster by Dutch horse dealer Eugene Reesink. The dark bay was licensed for breeding in Denmark and Sweden and became a stallion performance test winner in those Scandinavian countries. He also participated in the 2006 Hanoverian Young Horse Championships

In March 2007 Reesink sold the stallion to Americans Fritz and Claudine Kundrun, but he continued to supervise the management of the horse, who was standing at stud in Sweden. In June 2007 the horse moved to The Netherlands and was competed by Hans Peter Minderhoud at the 2007 World Young Horse Championships in Verden, where they finished fifth in the Finals for 5-year olds.

Rosevelt then moved back to Sweden to Jan Brink's yard for breeding and training before coming "home" to Deer Meadow Farms in Keswick, VA, in 2010.

He made his international Grand Prix debut in 2013 at the CDI Saugerties. He then had a one year break from international competition to do only one CDI show in 2014. In 2015 the combination went full power in Wellington and was invited to the Euro tour, competing in Munich and Achleiten, in the lead up to 2015 Pan American Games. However, they became the team alternates that year. At the 2015 U.S Championships they ranked in the top 6 in the first two rounds, but had to withdraw from the freestyle.

Rosevelt injured himself shortly after Rio. He was supposed to make his come back in the late spring of 2017 but that never came to fruition.

"He’s had quite a few hiccups last year with different health issues and as optimistic as I was that he may come back to competition, I have let go of that dream," Brock told Eurodressage on 1 February 2018.

While Brock is still riding Rosevelt, the horse will not return to the high performance Grand Prix show ring. The 38-year old is now focusing on a coming 6-year old Swedish gelding which she says is "very clever and thinks he’s very important. Lots of quality for a Grand Prix horse."

In an interview with Dressage News on 10 February, the Kundruns stated that Rosevelt is "healthy enough to possibly be a riding horse for Claudine or as a well-trained schoolmaster for a youth rider.