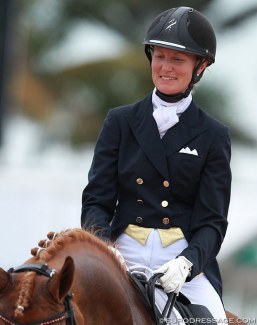 Caroline Roffman and Alice Tarjan have reached a settlement in the lawsuit over the sale of Faberge MF. The Palm Beach County Circuit Court case will be dismissed.

In October 2017 Tarjan filed a civil lawsuit against Caroline Roffman alleging fraud in the sale of her horse Faberge MF (by Fidertanz x De Niro).

Tarjan later found out that Eeckman never bought the horse, but that it had been sold to Bethany Peslar for 900,000 USD with money being sluiced through Eeckman's Belgian account. Peslar is trained by Endel Ots, who is Roffman's former business partner at Lionshare Dressage.

Tarjan filed a lawsuit on nine accounts, including fraud, breach of contract, unjust enrichment and violations of Florida’s Unfair and Deceptive Trade Practices Act. Tarjan sought $500,000 in damages for eight of the accounts.

Details of the settlement between Alice Tarjan and Caroline Roffman are not released as both parties signed non-disclosure agreements.