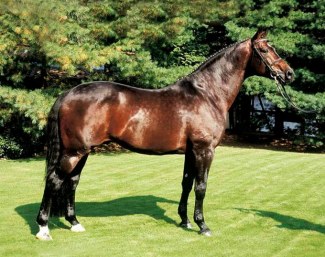 The Westfalian licensed breeding stallion Lanciano has passed away on 31 December 2017. The stallion was 27 years old.

Born in 1990 and bred by Karl Heinz Schubert, Lanciano was by Landino out of Pretty Darling (by Pilot x Perseus x Realist).

The bay stallion was first licensed at the 1992 Westfalian Stallion Licensing and later approved for the South German, Oldenburg and Hanoverian studbook. He did his 100-day stallion performance test in Munich in 1993 and scored 137.79 points to finish second out of 31 participating stallions. He topped the dressage index with 140.25 points and was third on the jumper index with 130.08 points.

Gerd Kraft of Gestut St. Ludwig acquired him as a 4-year old.

Lanciano never competed in sport, but as a breeding stallion he sired 22 licensed sons (amongst them Lord Sinclair I, II and III, Lancino de L, and Leardo) and 62 state premium mares.

On 31 December 2017, Lanciano died in his stall of natural causes after having spent some time in the paddock.

Lanciano was one of only two stallions left (aside from Abanos) at the once thriving stallion station St. Ludwig.