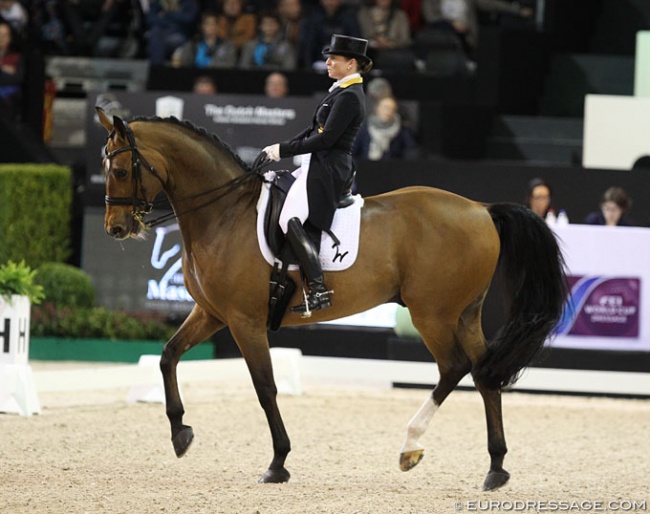 Aboard her 12-year old Westfalian gelding Emilio, she won the warm up Grand Prix and showed that she's on target to snatch that last qualifier kur victory of the season before the actual World Cup Finals.

Although nine of Holland's strongest Grand Prix combinations gathered in Den Bosch to challenge Germany in the lion's den for highest honour, the German delegation of just two pairs was supreme, taking first and third place taken with their fine, effortless riding.  Still, the 2018 CDI-W Den Bosch Grand Prix proved one thing: none of the 16 participating combinations are nearing an early season peak. They all struggled to stay fault-free and had little niggles and bumps in their test.

Den Bosch became an interesting venue to gauge the state of Dutch dressage at the beginning of the 2018 show season. Edward Gal is easily the stand out rider with his rising star Zonik, as Hans Peter Minderhoud no longer relies on his World Cup star Flirt (retired) and Johnson (spared) for the winter circuit. Madeleine Witte-Vrees and Cennin can not always show consistent form and today it was not their day, even though the judges gave her much leeway with their points. The most exciting Dutch combination of the moment is newcomer Anne Meulendijks on Avanti, who are a familiar face on the European show circuit but newcomers in the senior division. At their second senior CDI they finished sixth with much more in the tank.

There is one thing no-one can complain about: the Dutch really know how to stage a show! Den Bosch is such a beautiful indoor competition with a phenomenal show arena and a spectacular trade fair. There is a plethora of tack shops, and even more options for a quick snack, fine (healthy!) dining, wine tasting, a floating sushi bar, good coffee shops, etc. all with trendy decorations, flower arrangements and posh interior designs. The lifestyle at Dutch indoor competitions is brilliant and Den Bosch certainly is a stand-out.

So back to the Grand Prix.. and like we said, none of the riders were able to go fault-free, something not always properly reflected in the scores..

As penultimate rider in the class Isabell Werth saw that the bar was set at 77%, a score she has beaten multiple times on Emilio (by Ehrenpreis x Cacir AA). The bright bay gelding started off with a few small imperfections: a tight halt at entry, a half pass right not entirely regular and the rein back could have been more even. However the trot extensions were engaged and ground covering and the transitions to and from piaffe easy. In the first passage the horse was bent to the right. The extended walk was ok and the collected could have been more collected. In the second piaffe the horse back stepped once but the rhythm was strong. The extended canter was a highlight, but there were two counting errors in the zig zag. The two tempi's were fine, but in the ones Emilio gets very short. The pirouettes were small though and the final centerline was energetic and rhythmical, even though Emilio had the hindquarters slightly to the right.

Edward Gal and the 10-year old Danish bred Zonik (by Zack x Romanov) began with strong trot extensions and sweeping half passes of which the one to the right was better than the one to the left. None of the halts were square and Zonik reversed six steps instead of five. The passage was lightfooted, but sometimes uneven with more right hindleg activity. The muscled black stallion still struggles with the piaffe. The first one was nicely on the spot, but he didn't really sit. Instead he just pulled the hocks up behind the body. In the second piaffe he became static with no suspension, just picking up his feet. The final piaffe was the best one. The walk had good relaxation. Zonik is a very impressive, ground covering mover, but in the canter work there were quite a few blemishes, yet the quality is there. The changes were often crooked (end of zig zag, change at X, crooked onset of right pirouette). The left pirouette was the best one and the canter extension was very uphill but tight in the back.  The major difference between Werth and Gal's ride was that Isabell made hers seem effortless, while Gal still had to work hard on his young stallion. Zonik regularly tilted the head and was ridden on a steady curb rein instead of the snaffle. It will be interesting to watch how Zonik will develop with the World Equestrian Games in September as target. Gal totaled 77.696% for second place.  He got the highest marks from the judges on the short side (78-79%) while the long side had him at 75-76%. German Jessica von Bredow-Werndl took the 14-year old Dutch mare Zaire E (by Son de Niro x Jazz) to Den Bosch and landed third place with 73.630%. The very elegant and feminine looking mare shone in the piaffe and passage. She has a beautiful side silhouette in piaffe with good suspension and left, but can even be more on the hindquarters. The trot extensions were hurried though and in the half pass left the hindquarters could be more parallel. The extended walk had two hooves overtrack but in the collected she got lateral.The mare was always soft and light in the bridle. The extended canter and zig zag were highlights, but there was a mistake in the one tempi changes and in the final piaffe at X she dropped into halt. The pair's marks ranged from 71.304 to 75.000%.

Madeleine Witte-Vrees and her tall chestnut stallion Cennin (by Vivaldi x Donnerhall) were Holland's strongest pair at the 2017 World Cup Finals and were member of the Dutch team at the 2017 European Championships. The stallion, whose trot extensions and phenomenal extended walk always score top marks, is not always consistent at each show. Today in Den Bosch there were many sloppy items that prevented the score from going higher and the 73.565% they got was generous. The rider allowed her horse to poo first in the halt at entry before moving on with the test. The half pass to the right was not so elastic, the one to the left was nice and ground covering. Madeleine collected the stallion very early into passage on the second extended trot diagonal. Cennin is not the best engaged behind in passage but today he was walking. The first piaffe was on the forehand, the second better. Cennin is normally very expressive in the tempi changes, but he swayed in the hindquarters in the twos and one change was short behind. In the ones two changes were short, even though the horse is nicely uphill. The pirouette left was too big. On the last centerline Witte-Vrees was able to bolster Cennin's energy better and rode a nice final line.

The Western European League World Cup qualifier season comes to a conclusion tomorrow, Saturday 10 March 2018, with the Grand Prix Kur to Music. The nine highest placed riders on the ranking are eligible to compete at the 2018 World Cup Finals in Paris, France, on 12 - 15 April 2018.

Eurodressage was on the scene in Den Bosch to take photos of the Grand Prix test. If you are interested in prints of digital files for social media use, contact us.