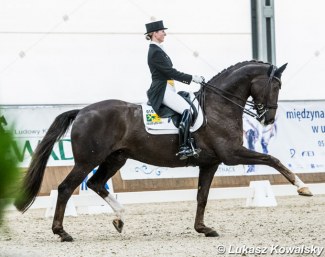 Australian Olympian Kristy Oatley swept all three big tour classes at the 2018 CDI Zakrzow  on 13 - 15 April 2018, making her trek to Poland count as she scored personal best marks in this indoor competition.

Oatley trailered both her number one and two to Zakrzow: Du Soleil and Swagman. Aboard her 14-year old Hanoverian gelding Du Soleil (by De Niro x Caprimond) she topped the board in the Grand Prix with 72.065%. In a field of just 12 competitors, Oatley breezed past the competition and also captured third place on her 14-year old Oldenburg gelding Swagman (by Sandro Hit x Don Schufro) with 68.761%.

The Hamburg based Australian continued on a winning streak capturing the Grand Prix Special victory with Du Soleil on 73.404% and the Kur to Music on Swagman with 75.800%. Portuguese Boaventura Feire and his Sandro Hit offspring Sai Baba landed second place in the Grand Prix (68.957%) and in the Kur (75.00%).

The 44-year old Janas has taken Lord Django, whom she bought in 2015, from young horse to FEI level herself. She represented Poland at the 2016 and 2017 World Young Horse Championships in Ermelo and has made her small tour debut in Zakrzow.