No Holding Down Werth, Wins 2018 CDI Hagen Grand Prix for Special on Emilio 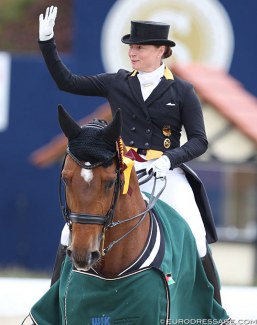 There seems no holding down Isabell Werth. The world's number one is on a roll and no matter if she rides Weihegold or her number two Emilio, she is the one to beat and has the unshaken favour of the judges in her veni-vidi-vici campaign unbroken since 2017.

Also at the 2018 CDI Hagen "Horses & Dreams" competition at Hof Kasselmann, the Rheinberg based rider wielded the axe of power and scored yet again a personal best scores, this time on the 12-year old Westfalian Emilion (by Ehrenpreis x  Cacir AA) in the Grand Prix for Special.

Werth's riding is impeccable. Her horses are trained through the body, always stretching into the contact, foaming and chewing the bit. You will never see a curled up horse, a fake contact, a rigid mouth with her horses and her level of gymnasticizing a horse is unparalleled. For her rhythm is key and although you would sometimes like to see a horse's back less hollowed and the croup lowered in passage and piaffe, she always makes it look good in the show ring.

However, I have noticed a judging trend that I can't seem to understand: the merry-go-round of  80%. I think I missed getting on this ride! Werth, and a few other top 10 dressage riders, now easily get 79-80-81%. It is no longer a super special score. At national level new rising Grand Prix horses ridden by their heroes get those points almost automatically - the judges closing their eyes to the weaknesses still and purely rewarding talent and promise.

At international level, come back kids straight away get these halo points while not (yet) showing the same level as before. A few of those riders are in the 80% brackets; and a few more have worked their way up to the 75% no matter the quality of performance.

Every weekend at a CDI a new personal record is ridden, riders beam at the press conference that it was "my horse's best test ever" yet I clearly recall having seen more polished and sharper tests of those horses.

At the 2018 World Cup Finals the Grand Prix test was not the best Championship test every seen and the top riders all scored at least 2 to 3% too much. At the CDI Joosland there were so many imperfections in the rides of some rising Grand Prix horses, but the celebrity riders get top scores  despite poor transitions, repetitive mistakes and tension.

I don't have a problem with the 80%. For the image of the sport it is only better. However, it just unfair to the other riders who keep chiseling at their horses and themselves, and show improvement too, yet never seem to climb out their caste-system of 63% - 66% - 70%. They are stuck there for life! Good test, bad test, no matter.

The CDI Hagen Grand Prix for Special was the most exciting class of the show with 23 top combinations and the long-awaited show return of Sönke Rothenberger and Cosmo. At the 2017 European Championships Rothenberger should have won Grand Prix Special gold, but the judges preferred otherwise. It was more than interesting to see if the young rider will make the lethal blow this year and stake his claim for the world number one spot.

Werth and Emilio were on strong form but not as impeccable as their 81.326% winning score suggests They showed outstanding trot extensions, and good half passes although the one to the left could have been more elastic. In the rein back Emilio dragged his feet. Emilio's passage was not spot on in Hagen. The bright bay gelding dragged the hind legs a bit not sufficiently engaging from behind, even though he was regular. The piaffes were lovely though. In the extended walk Emilio did not show the biggest striding and his collected walk was simply poor: the gait got so short, tight, and lacked collection through the body, yet the judges scored the movement between 5.5 to 8 !! Werth and Emilio were solid in canter but there could have been more polishing. The hindquarters led in the zig zag to the right, the one tempi changes were correct but not so ground covering. The extended canter and pirouettes were very nice. The final passage on the centerline was regular and rhythmical but the horse got wide behind.

The class was judged by Lehrmann, Almasy, Wust, Verbeek and Hoevenaars and they were in unison about Werth's superiority. She scored a total of 81.326% with marks ranging between 80.00 and 82.174%.

"I believe that was one of Emilio’s best Grand Prix, he has matured greatly and I am really happy with his progress and performance here," Werth commented after her test.

Jessica von Bredow-Werndl's 14-year old Dutch warmblood mare Zaire E (by Son de Niro x Jazz) is the highest quality horse she is competing at Grand Prix level at this moment. The mare did however give the Aubenhausen based rider a challenging ride in the Grand Prix  as she was quite spooky and distracted by the surroundings.

The mare is incredible elegant, feminine and lightfooted and is a powerful mover, but today she was incredibly hurried and rushing through the trot extensions full speed. The entire trot tour needed more collection and relaxation, also the first piaffe-passage stretch. In the second pi-pa the mare threw the tongue out briefly despite a soft contact and good sit in piaffe. The one tempi changes were hectic, the two's need to be straighter. The highlight of the test were without a doubt the two pirouettes.

The judges loved this up tempo test and rewarded it with 75.696%

In a press interview before the CDI Hagen, Sönke Rothenberger spoke that his highly sensitive 11-year old Dutch warmblood gelding Cosmo (by Van Gogh x Landjonker) had come of age and no longer needed a warm up show before the real competition starts. The young boy was proven wrong in Hagen and his bay gelding was a bit all over the place, despite Sönke staying cool as a cucumber.

At the Europeans in Gothenburg last summer, Cosmo certainly kicked the door in as he is probably the most talented and most complete Grand Prix horse in the world at this moment, if his sensitivity does not get in his way. In Hagen, it unfortunately did, but there is no reason for panicking. The season is still very long.

Cosmo began his test with a smashing extended trot and fluent half passes in which the one to the right was better. He then spooked at H, turned around. In the rein back at C that followed the horse stepped outside the ring with the hind legs! A super second trot extension. The passage was bouncy but in piaffe there were several steps in which Cosmo dragged the right hind leg, also in the transitions to passage. The extended walk was tense after X, the collected walk was tense too. The two tempi changes were big, the zig zag edgy in the changes to the right, the one tempi's were outstanding, but in the extended canter the horse threw in a flying change that had to be corrected. Cosmo got shorter and shorter in the neck in canter. The left pirouette was nice, there was a double beat in the right one.

Swedish Patrik Kittel is one of these riders who is also experiencing a high in his career. Not only do his horses show significant improvement, but when things do not go perfectly as planned, the Swede has now received official leeway from the judges and continues to score in the 75% bracket.

His 74.457% score on the Swiss bred and owned 10-year old Well Done de la Roche (by Furstentraum x Walt Disney) proves that. The bay mare is a super talented, elegant horse with incredible piaffe-passage potential, but she was so incredibly tense and tight as a bow. Not a single diagonal showed proper extensions, not in trot, not in walk and not in canter (since the Totilas days the judges' mathematical formula is "Flashy horse/famous rider + mediocre/poor trot = 7" - best examples are Totilas and Bella Rose).

Well Done's passage is so incredibly lightfooted though, but due to the tension it looks mechanical. Kittel stayed very quiet in the saddle and steady with his hands (even though the curb rein was one and the snaffle in a loop) in the trot tour, not to disturb his high strung horse. The half passes were light and expressive. The zig zag and one tempi changes were well ridden. Well Done is still young and is one to watch for the future.

Dante Weltino Not Yet in the Groove

Swedish Therese Nilshagen and her sympathetic 11-year old Oldenburg stallion Dante Weltino (by Danone x Welt Hit II) have not yet found the groove they were in at the 2017 CDIO Aachen and European Championships. However, like with the other horses the season before the 2018 World Equestrian Games is still long and there is no reason to peak too soon.

In Hagen, the gorgeous black stallion began with a conservative first trot extension, huge half passes and a very nice first piaffe although there was a loss of collection in the transition in and out. The extended walk had 1 to 2 hooves overstep but not the clearest rhythm. He dropped into the second piaffe and overall was too open and too loose in the frame in passage. One wishes to see the stallion pull more on the bit. The second passage became uneven as he sneezed. In canter, the horse could have been more up in the poll throughout but the extended canter was spectacular as well as the zig zag. there was a mistake in the one tempi changes. The final passage was very expressive but Dante Weltino swung a bit in the hindquarters.