Gonzalez and Denksport In the Picture at the 2018 CDI Segovia 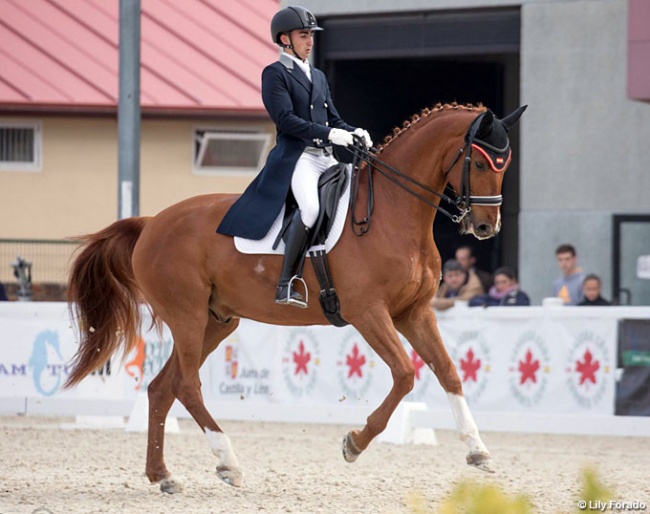 Spanish young rider Juan Jose Gonzalez de las Cuevas and Denksport built momentum at the 2018 CDI Segovia at the beginning of April, winning two out of three classes after a sixth place in the warm up round.

Coached by Victor Alvarez at the CAVA equestrian centre near Girona, Spain, the 19-year old Gonzalez began his 2018 show campaign by moving from junior riders to young riders level and premiering at the CDI Toledo in March where the pair posted consistent mid sixties scores.

However, at the 2018 CDI Segovia in April, the combination built momentum and showed more accuracy in their tests, placing sixth in the team test with 68.627% and winning the individual with 69.559% and the Kur to Music with 73.667%.

"I'm really happy with the progress that Denksport has made," Gonzalez told Eurodressage. "The first day we did a really good test, but with some mistakes to work on. The second day we get a 69% and we get first position, also the third day at the freestyle we get the first position. In general he gave me really good feeling every day."

When asked what he has been working on in particular, Juan replied, "now I’m concentrating on improving the extended trot; just to do it more expressively and not running so much. I also work on the canter pirouettes."

Juan Jose or "Juanjo" began riding Denksport two years ago and he started competing him internationally in 2017. The 8-year old Oldenburg gelding is bred by Aloys Böckmann and is by De Niro x Rubinstein x Furioso II. He sold to Spain as a 5-year old at the 2015 Winter Mixed Sales in Vechta. Denksport is named after a famous German brand of crossword and sudoku puzzle books.

The pair finished 12th at the 2017 Spanish Junior Riders Championships at the Equestrian Centre Castilla y Leon in Segovia, Spain, last September. For 2018 they have stepped up a level and are competing in the young rider small tour classes.  Gonzalez aims to qualify on the Spanish team this year.

"My goal for 2018 is representing Spain in the European Championship and I'm also looking forward to do a nice job at the Spanish championship, trying to get a good ranking there," said Gonzalez.