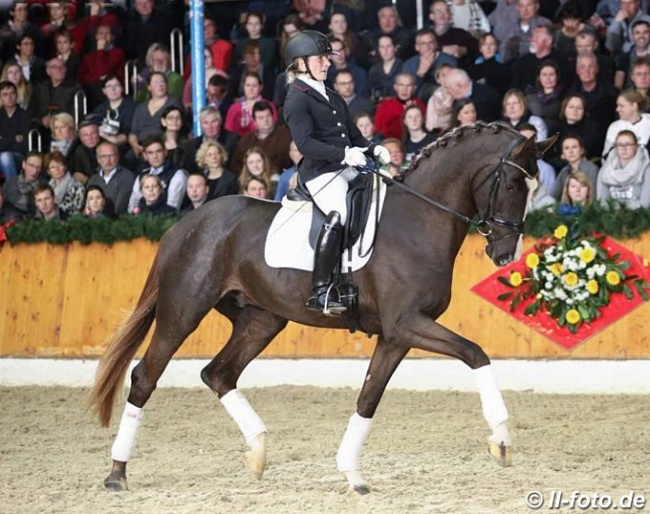 Sezuan's Donnerhall became the high scoring stallion at the 14-day stallion suitability test held in Neustadt/Dosse on 2 - 15 May 2018.

A big mount of 43 stallions was initially entered for the tests but there were nine no-shows. Thirty-four began the tests, 6 dropped out, so 28 stallions in fact completed the fourteen days.

No less than three jumper stallions performed poorly in the dressage phase and didn't even score the required 7.5 to pass. However, if one discipline score is 8.0 or higher, they pass nontheless. Yet another Quantensprung failed to impress the judges. The Brandenburger licensed Quirinal (by Quantensprung x Hotline) failed with a 7.2 total score (7.8 dressage, 6.2 jumping). Also Dalmore (by De Niro x Rigamento)  could not impress with his insufficient 7.23 total.

Schockemohle's Mecklenburger licensed Sezuan's Donnerhall (by Sezuan x Sir Donnerhall) stood out according to the judges and scored 8.68 in total, with a whopping 9.34 for dressage and 7.8 for jumping. The colt got 10 for character, 9.5 for willingness, 9 for walk and trot, 10 for canter, 9 for rideability, 7 for free jumping and 9.25 for rideability under the guest judge rider.

The April Munster 3-day sport test winner D'Alessandro (by Don Frederic x Stedinger) got 8.53 for dressage but with only 6.78 for jumping, his overall went down to 7.98 points for the 14-day suitability test. A nameless Goldberg x  got 8.38 for dressage but only 6.83 for jumping (total 7.88).