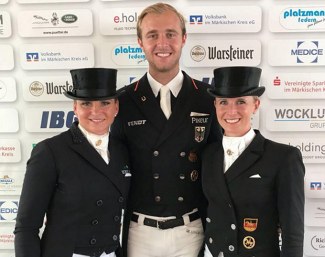 After claiming his first title as senior Grand Prix champion at the 2018 German Dressage Championships, the 23-year old Sönke Rothenberger concluded his weekend in Balve, Germany, on Sunday 10 June 2018 with Kur gold.

A separate set of medals is awarded to the top three place getters of the freestyle, though it is the technical championships (Grand Prix and Special) that truly matters. Those classes count as squad selection trial for the CDIO Aachen and upcoming summer Championships, this year the 2018 World Equestrian Games.

With Rothenberger's biggest rival Isabell Werth on Weihegold OLD dropping out of the freestyle to spare the mare, Sönke freewheeled to a first place in the freestyle on a score of 88.425%, riding to his Slings Music Cast composition that already thrilled the crowds at the 2017 European Championships in Gothenburg.

The last male rider to become German Dressage Champion was Matthias Rath in 2011. Rothenberger is thrilled to join the club of German Champions. "It simply was a very successful weekend. I'm very happy," he said.  "The three days here are mentally strenuous. Now we'll pack up our stuff and go home. I'm sure we'll celebrate a bit more over there."

Dorothee Schneider and Matthias Herbert's 12-year old Bavarian bred Sammy Davis Jr (by San Remo x Wenckstern) got silver with 82.975%, but she had Jessica von Bredow-Werndl right on her heels as the Aubenhausen based rider landed third place with 82.675%.

"Friday was Sammy's best Grand Prix test and today probably his best freestyle," Schneider commented. "Yesterday in the Special he lacked a bit of power maybe, but the weather was also pressingly hot. My goal for today was to finish second behind Sönke, who is in a different league. We accomplished that and I'm super happy with silver. I'm happy that Sammy is in such top shape. He always gives me a good feeling."

"At the start Dalera was a bit tense, but then she swung things round and focused fully on me," Von Bredow-Werndl explained. "She got very mature and built up self confidence. By now she enjoys the atmosphere at shows and she continues to develop steadily. She fascinates me. I'm very happy to now have three horses in the Olympic squad."