Werth on Winning Streak at 2018 CDI Fritzens, First in Grand Prix for Kur on Emilio 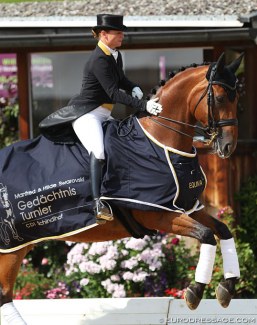 The 24th Manfred & Hilde Swarovski Memorial Dressage Show in Fritzens, Austria, is all about the number 1 in the world. On Friday 29 June 2018, Isabell Werth surprised with her victory in the Grand Prix for Special after a sensational come back with wonder mare Bella Rose. On Saturday 30 June, Werth won the Grand Prix for Kur on Emilio.

Bella Rose's return to the show ring after 3.5 years led to a several-hour temporary unavailability of the Schindlhof website due to more than 550,000 hits to see the video footage and read about the come back.

On Saturday, the 48-year-old German came up with another great performance – this time with Emilio (by Ehrenpreis x Cacir AA, with whom she is currently ranked #3 in the world. In the Grand Prix for Kur the pair showed stunning trot extensions and half passes. The passage had nice suspension but Emilio tends to swing the left hind leg out from under the body. The piaffe was nicely on the spot, even though the horse needs to move the weight more on the hindlegs. The extended walk was good in overtrack but mediocre in rhythm, the collected walk was tense and short, but still averaged a score of 6.9? Werth rode the extended canter with much risk, the zig zag was nice, but the one tempi changes lacked ground cover and then a mistake happened. The pirouettes were tiny, but the exit of the right one needed more polish.  They scored 79.804 percent for a very clear first place.

“For this one moment, the jockey was asleep,“ Isabell Werth joked in an interview at Schindlhof after her performance. “Overall, it was a great lap. Emilio has been able to improve his basic constitution once again. The piaffe and passage tour has become even better. Everything comes with a good push from the hind leg.“

For the World Equestrian Games, Isabell Werth is spoilt for choice between Weihegold (currently #1 in the world) and Emilio.

German national coach Monica Theodorescu was delighted with her riders top performance: 2016 German Olympian Dorothee Schneider finished second on Fohlenhof’s Rock’n Rose. The typical Rubinstein-line offspring Rock 'n Rose (by Rubin Royal x Feiner Stern) is a very eye catching horse and showed nice trot extensions. The passage lacked collection though and the rein back did not have enough steps. The pirouette right was the nicest one. A mistake in the one tempi changes pushed the score down to a 71.935 % for second place.

The Germans further captured the top spots on the board with Anja Plönzke on Fahrenheit, Stefanie Schatz-Weihermüller on Wunderkind and Lisa Müller with Birkhof’s Dave FBW ranked behind team leader Werth on 3rd, 4th and 6th place.

This German phalanx was disrupted by Austria’s team rider Astrid Neumayer with her temperamental Rodriguez. The Upper Austrian and her 18-year-old experienced horse finished fifth with a rigorously graded score of 67.826 percent.

The Small Tour was dominated by Dorothee Schneider with First Romance ahead of Austria’s Stephanie Dearing with Del Magico FRH, and in the first part of the Austrian State Championships Para-dressage, defending champion Pepo Puch is in the lead as expected.

Eurodressage was on the scene in Fritzens to photograph. If you are interested in prints or files for social media, send us an email.