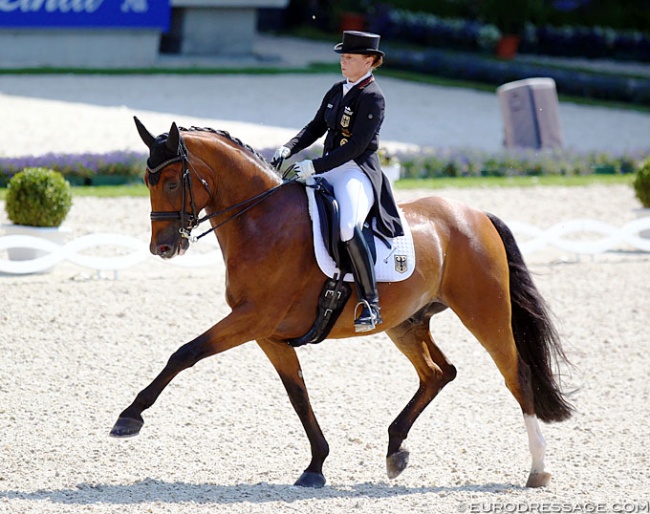 Isabell Werth and Emilio made a remarkable recovery in the Grand Prix Special and topped the board after an exciting CDIO 5* class, which had plenty of twists and turns that make Aachen what Aachen is known for: the best dressage competition of the year!

Werth had a a below par performance in the Grand Prix and with two mini-rears in the piaffe and more bobbles she finished 17th in the ranking of the 5* Grand Prix on Thursday; that slot she hasn't been placed in, in eternity. But Werth is known for stellar recoveries and her fighter mentality. On Saturday morning 21 July 2018, she went back to the drawing board, put a new bit into Emilio's bridle and returned with a vengeance for the Special test.

Isabell rode full concentration, but did not put the pedal to the metal. Some of the judges, however, were already convinced of the effort and thought it was brilliant. The 12-year old Westfalian gelding Emilio (by Ehrenpreis x Cacir AA) did not halt square, but then continued with stunning trot extensions and neat half passes. The passage was well ridden but could have been even more regular, with especially the left hind leg regularly not tracking up. The transitions between the extended trots and passage were beautiful. The extended walk had good overtrack but the rhythm was underwhelming, the collected walk was too open in the frame and too short. The first piaffe was light and rhythmical, in the second there was some back-stepping. In the passage the horse was bent to the right. Werth rode very carefully on the marker but there was a mistake in the two tempi changes at the end of the diagonal. The ones should have been more uphill (still a 7.5) but the pirouettes were very nice. In the final passage he was crooked to the right. Werth certainly produced a strong test, but she was careful not to upset her horse. She scored a winning total of 79.128%.

The judges panel for the Special included Mariette Sanders-van Gansewinkel, Katrina Wuest, Andrew Gardner, Annette Fransén-Iacobaeus, and Hans-Christian Matthiesen, but they were not unanimous about the quality of the ride. They ranked the pair between first and fourth place with scores going from 77.128% and 80.746%.

Twists and Turns in Aachen

The tables were turned for the winner of the Grand Prix, American Laura Graves. She ended up 11th in the Special with 74.085%, her lowest score since January 2016. Her 16-year old Dutch warmblood gelding Verdades (by Florett As x Goya) entered the arena razor sharp and spooked several times from the TV-camera at the long side near B.

Verdades was visibly not at ease in the arena and it already showed in the tense, but square halt at entry. The passage was super electric and with much airtime, but constantly behind the vertical and with the poll dropped. There was a break into canter in the right extended trot followed by a spook (score for extended trot still 7.5, one judge went down to 4.0. The others penalized the spook and break in the transition). The extended walk had just one hoof overtrack and no real relaxed neck stretch (6.0 - 7.0). The piaffe was on the spot but with the hindlegs out (7.5 - 8.5!!). The passage in between had the legs quick off the ground and up in the air. There was a mistake in the two tempi changes, but the ones were excellent, yet tight in the neck. The final extended trot was powerful but tense as he again looked at the camera. Graves kept her cool throughout the ride and the final centerline was energetic, but the piaffe at X crooked to the right (7.0 - 8.0).  Their final scores ranged from 72.872% to 75.957%.

Danish Cathrine Dufour, who was second in the Grand Prix, dropped to fourth place in the Special after several unusual mistakes. Her 15-year old Danish warmblood Atterupgaards Cassidy (by Caprimond x Donnerhall) broke into canter in the extended trot and became visibly uneven behind in the half pass left (judge Fransen-Iacobaeus was the only one to notice that). The trot work was well balanced and Dufour had the nose nicely in front of the vertical most of the time. The extended walk was outstanding!. The piaffes were quite grounded but on the spot. Unfortunately in passage, Cassidy does not carry himself very well and gets loose in the topline, swinging with the fore- and hindquarters. The two tempi changes were super straight and the extended canter very nice. The pirouettes were small but the left one was the better of the two with more lift. They scored 77.489% with marks ranging from 75.106 to 78.617%.

Langehanenberg and Perry Surprise for Second and Third

Not even four weeks after delivering her second baby, Helen Langehanenberg has brought Louise Leatherdale's 15-year old Hanoverian stallion Damsey to Aachen on best form. Although the dark bay stallion looked a bit less closed in the frame than in the Grand Prix, he scored even higher.

The first trot extension was ground covering and powerful but on two tracks with the hindquarters to the right. The half pass left lacked some bending in the ribcage, but Langehanenberg had the stallion going in a very regular rhythm. In the passage the stallion should have pushed a bit more from behind and stayed more regular, but the 30°C heat temperatures probably played a role for all horses. Overall the trot work was slightly less carried today, with the horse getting too open in the frame especially in the extended trots. The extended walk was superb, but in the collected he became lateral (7.0-7.5!). The first piaffe was nicely on the spot, the second traveled a bit too forward and there could have been more spring and suspension. The horse lost the passage before the canter strike off. Damsey has scopey tempi changes but swung the hindquarters to the right in the two's. The ones were straighter and very nice. The extended canter was uphill. Both pirouettes were well ridden. Damsey again lost the impulsion in the passage on the final stretch on the diagonal, anticipating the end halt. The combination scored a personal best of 79.021% to place second.

American Kasey Perry-Glass and Gorklintgaards Dublet (by Diamond Hit x Ferro) showed excellent form in the Grand Prix and today they even upped the ante with a very beautiful ride. The trot work was smooth and flowing. One trot extension was a bit conservative. Dublet's passage is text book in rhythm, regularity and suspension, with hindlegs reaching under (seems to be rare nowadays) but overall the nose has to be more out. He consistently drops behind the vertical. The extended walk was a bit limited in ground cover. The first piaffe was lovely, the second traveled too much forward. The canter half passes were accurate but can have more scope. The ones were lovely. Overall, Perry's ride was not spectacular, but simply very correct, the way dressage should be. The pirouette-one tempi-pirouette on the centerline was neat and the final centerline superb. They scored 78.787% for third place!

The CDIO Aachen Nations' Cup is decided over two rounds: the Grand Prix and Special. While Team U.S.A. was in the lead after the Grand Prix, home team Germany clinched the victory after the Special.

Isabell Werth's first place on Emilio made things right for the homies. “I feel very guilty and I am so sorry for Emilio that I didn’t listen to what he was trying to tell me," said birthday girl Isabell Werth at the press conference after the Special. “Emilio was back to his normal self today and we are a team again! My colleagues lent me some support there. That was obviously their birthday present for me." Werth turned 49 today.

The 2018 CDIO Aachen concludes on Sunday with the CDIO Kur to Music. Who will become the Aachen Grand Champion of 2018, nothing is decided!