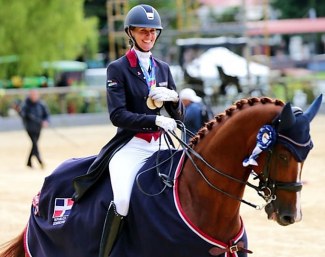 Team Mexico and Dominican Republic's Yvonne Losos de Muniz were the gold medal winners at the 2018 Central American and Caribbean Games held in Barranquilla near Bogota, Colombia, on 23 - 26 July 2018.

Mexico in Charge of Team Competition

The Mexican team, consisting of Mariana Quintana (Benzema), Bernadette Pujals (Heslegards Rolex), Mónica Burssens (Elfentanz), and Enrique Palacios (Lorenzo) bagged the gold after they bested the ranking with all scores from the Prix St Georges and Intermediaire I totaled.

Guatamela ended up with the bronze and relied heavily on the top rides of Esther Mortimer on the 14-year old Hanoverian Adajio (by Alabaster x Eldorado) with a second place in the Prix St Georges (72.000%), and of Alexandra Dominguez Thomas on the 9-year old Dutch warmblood mare Etanga, who landed fourth place in the Intermediaire I with 66.941%. Their other two team mates were Vivian Andrea Schorpp Pinot (Zedrick Dyloma) and Isabel Arzu de Arroyo (Macchiato)

For the individual championship, the scores of the Prix St Georges, Intermediaire I and Inter I kur to music were totaled.

"Even after twelve medals it's impossible to get used to the overwhelming emotion that fills my heart every time I take that step up to the podium for my country and my people," said Yvonne Losos de Muniz after winning gold and silver in Bogota. "None of this would be possible without Fredensdals Ziz Zag, one of the most noble and spectacular horses I have ever worked with. Our entire country thanks his owner and my dear friend Kathy Priest for allowing me the priviledge of riding him at these Games."