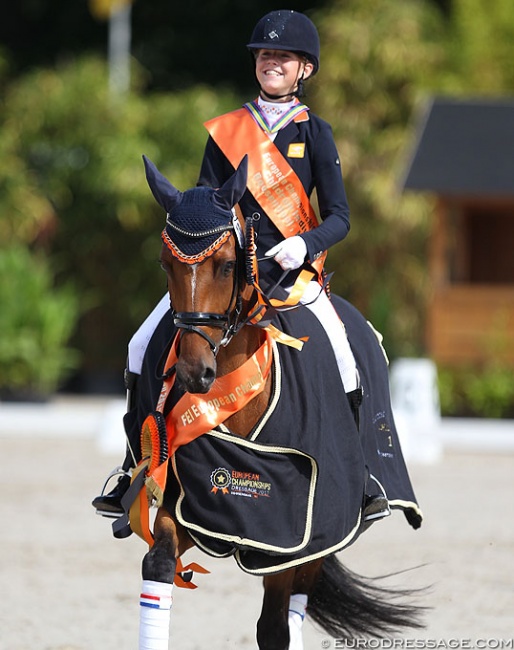 Happy Feet is an 11-year old Dutch warmblood by Tuschinski out of Ereara (by Animo). He is owned by the Van Woudenberg couple.

Under the now 13-year old Sanne Buys, the bay gelding Happy Feet made his international show debut at Children's level at the 2017 CDI Diepenbeek in July 2017. The pair's next international was the 2017 European Children's Championships in Roosendaal where they won team and individual gold.

After the Europeans Buijs decided not make the transition to junior level in 2019 but instead take a break from riding completely for family reasons.

Happy Feet's owner Linda van Woudenberg decided that Happy Feet could be a perfect schoolmaster for a new rider then and Jill Bogers is the lucky girl to have received the ride on the gelding.

The 13-year old Bogers made her international show debut at CDI pony level this year with the 11-year old NRPS pony Zip (by Zodiak x E-Boy). They competed at CDI's in Sint-Truiden, Diepenbeek, and Exloo.