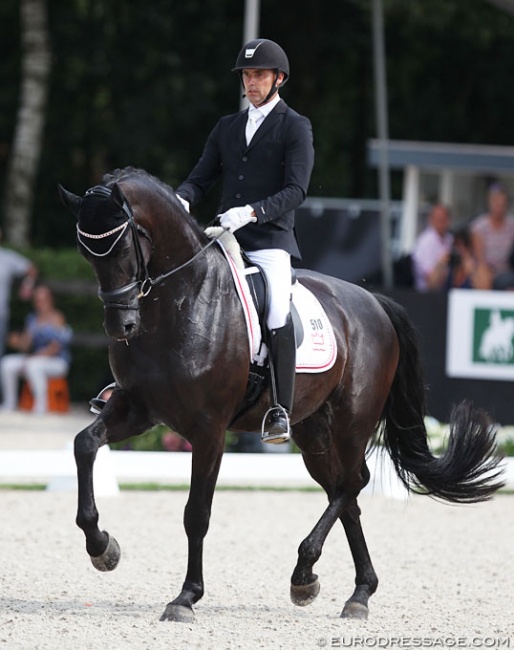 Jorst told Eurodressage that both Botticelli and Grand Galaxy Win will be standing at stud in the U.S.A once they have arrived.

"  There is no doubt that Zhaplin is a very special horse for me and that's because I had the pleasure of riding him myself," Andreas Helgstrand stated. It gives me great pleasure that Charlotte sees the same potential in Zhaplin that I do and I am very much looking forward to following Charlotte and Zhaplin in the future. We are very proud that our customers return time after time. We follow our customers closely on their way as they develop as a dressage rider and it makes us proud when they return to Helgstrand Dressage to find their new dressage prospect in order to fulfill their dreams."

Zhaplin has already arrived at Jorst's farm, while Botticelli will follow soon. Helgstrand states that Grand Galaxy will stay with him and continue his training under Severo Jurado Lopez. Jorst clarified the situation with Grand Galaxy Win as following: "Grand Galaxy will stay at least till next fall. However he will come to the us in December, go back in March, breed and get trained until I permanently bring him over."

In exchange, Jorst has sent her small tour horse Ray Dance to Denmark to be sold. The horse already moved to Europe right after the 2018 U.S. Dressage Championships in Wayne, ILL, in August. Joining Ray Dance in Denmark will be Severo Jurado Lopez' 2016 Spanish Olympic team horse Lorenzo, which Jorst purchased in May 2017 as Nintendo's successor. Lorenzo never got to compete in the U.S.A. due to injury.

"Lorenzo is doing great. He is returning to Europe this month to be in his normal surroundings," Jorst told Eurodressage. "I'm not sure if I’ll sell Lorenzo. Once he’s back doing the Grand Prix, I probably would, but nothing is cast in stone."