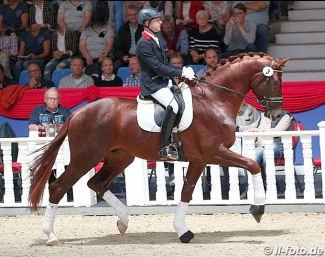 Vivat Rex (by Vivaldi - Samarant - Rubinstein I), bred by Heinrich Gerriets, sold to customers from the Netherlands for 200,000 euro.

The second most expensive horse was the S-level trained Silver Black OLD (by Sandro Hit - Donnerhall - Classiker), bred by Georg Sieverding. He sold for 150,000 euro to the U.S.A.

The most expensive show jumper was Levi (by Lordanos - Luxano - Landor S) which sold for 80,000 euro to Switzerland.

The price highlight of the foal collection was Vardy (by Vitalis - Florencio I - Feinbrand), bred by Hans and Britta Scherbring. The chestnut colt sold for 120,000 euro to Sissy Max-Theurer in Austria.

“Apart from long-term customers we were able to win many new Oldenburg friends who secured their champions for the future in Vechta”, rejoiced auctioneer Fabian Kühl. Approximately half of the riding horses were sold to foreign countries. High quality horses will be off to Sweden (5), Switzerland (4), United States of America (3), Great Britain (2), Australia (1), Netherlands (1), Spain (1) and Turkey (1).

Nine of the talented foals of the foal collection will be leaving Germany to the United States of America (4), Spain (3), Austria (1) and Great Britain (1).