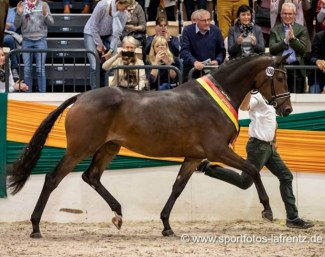 Eleven winners and reserve champions from the regional mare shows were invited to appear in the mare championship to battle it out for the overall champion's title.

Belle Fleur (by Millennium x Le Rouge) was named the mare champion. She is bred by Horst Ebert and owned by the Belle Fleur syndicate. She was the reserve champion at the 2018 German Mare Championship in Lienen this summer and now she has become Trakehner mare of the year.

"Belle Fleur is the embodiment of type, frame, and size in her qualities as a riding horse and her presence," said judge Werner. "Her movement mechanism is phenomenal."

The typey and sympathetic Ivy (by Impetus x Songline) was named reserve champion. She is bred by Dagobert Vester and owned by Gestut Murtal in Austria.

Licensing committee member Hans-Pëter Karp celebrated when his mare Herbstrot (by All Inclusive x Inserburg) finished third. She is bred by ZG Karp and she was the winner of the mare show in Westphalia.