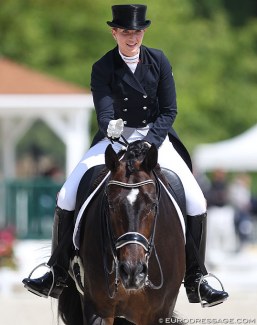 After eight years being based in The Netherlands, French Grand Prix rider Morgan Barbançon Mestre has decided to relocate back home to Geneva, Switzerland.

The Spanish-French born Barbançon Mestre rode for Spain at the 2012 Olympic Games in London on Painted Black. As a youth rider she was based in Germany, but to make the transition to Grand Prix level she moved to Holland eight years ago and began working with Anky van Grunsven.

Since then she has based her horses at Stable Korenbloem in Weert, The Netherlands, and after her split with Van Grunsven she has trained with Andreas Helgstrand, Ton de Ridder, and Alex van Silfhout.

Morgan has now decided to move her horses back to her home in Geneva, Switzerland, where her family owns a small yard.

"I loved my adventure in Holland and learned so much, love every minute of it. I think it’s time now to go back home and try something new. I want to be with my family and I have business plans," Barbançon told Eurodressage. "Dressage being my passion and riding horses I have plans to develop Dressage in the French part of Switzerland."

For Morgan the move automatically entails the end of her training with Alex van Silfhout. "it’s a far drive to go train there," she said. "Holland is very far for training on a regular basis."

Morgan has been working with Dorothee Schneider most recently, especially with her young horses, while her sister Alexandra Barbançon is her eyes on the ground at Grand Prix level competitions.

"Dorothee is close to home and it seems to be a good click," said Morgan. "I have a super click with her, she’s passionate, we spend hours speaking and she’s super interesting, she’s already already helped me so much in little time."

Barbançon is currently competing Sir Donnerhall II and Bolero at international Grand Prix level and has a third rising Grand Prix horse, Bahia (by Painted Black x Negro) alongside the 7-year old Lilo and the 6-year old Habana Libre, which Diederik van Silfhout rode at the 2018 World Young Horse Championships in Ermelo in August. Girasol has been retired to the field in Geneva and an ET foal is expected from her by Franklin.