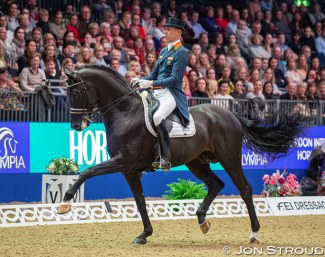 Dutch duo Hans Peter Minderhoud and Dream Boy became the winners of the pilot "shortened Grand Prix" class which was tested for the first time at the 2018 CDI-W London Olympia Horse Show on Monday 17 December 2018.

Lead Up to the Pilot Project

The shortened Grand Prix test was created by a panel led by Richard Davison and David Hunt at the request of "some" World Cup organizers to which the FEI heeded.

In October the FEI suddenly announced the existence and scheduled trial of this new shortened test at Olympia with as goal "to maintain a pacey and interesting competition on the first day, keep the audience engaged, expose emotions with direct interview of the athletes still mounted at the end of the test."

The FEI is focused on finding ways to make dressage sport more "entertaining" and achieve more "air time on television", ignoring the fact that the niche audience of dressage lovers want to see a sport answering to the basic principles of classical dressage,  often difficult to understand by laymen. Furthermore the television landscape has been changed to an online, on-demand streaming world, instead of scheduled timings on the classical TV.

To make it ironic, the live streaming of the Olympia shortened Grand Prix did not work yesterday and there was no TV channel broadcasting this "pacey" class.

This year's edition of Olympia saw some serious top pairs withdrawing from the line-up right before the event, reducing the already small field from 15 to 12 riders.  Biggest absentees were Charlotte Dujardin's number one horse Mount St. John Freestyle, as well as Edward Gal's number one Zonik and Juan Matute Guimon's Quantico. No substitutes filled in the three vacant spots.

Hans Peter Minderhoud and his WEG team ride Dream Boy, a 10-year old KWPN stallion by Vivaldi x Ferro, scored the winning mark of 73.895%. The expressive black stallion showed off lovely extensions and trot half passes, but lost clarity in both walk parts and there was a mistake in the two-tempi changes.

Looking at the individual protocols of the combinations, several judges did not spot some of the clear mistakes the top ranked riders made, nor properly down scored poor crooked changes, poor walks and other blemishes. It is as if the judges were more lenient to inaccuracies and mistakes knowing this was a test project for the riders.

To give the whole pilot project more X-factor, the visualisation of the Shortened Grand Prix at Olympia became a Westworld-like staged production with lights-camera-action.

After each ride - instead of properly cooling down their horse - the riders dismounted and were brought back into the arena for an instant interview about their feeling in their test. Former Dutch Olympian Imke Schellekens-Bartels conducted the interviews.

Afterwards music rolled and the attention was drawn to the scoreboard above X, on which the scores of each of the five judges next to their portraits flashed. The riders were videoed looking up so that the crowd could see their facial reaction.

What Do the Riders and Judges Think?

After winning the class Hans Peter Minderhoud commented “It was all very new and different to what we have been used to, but for me it was a really cool moment when the scores came up and I was very happy.”

Charlotte Dujardin said: “I didn’t have the chance to watch anyone ride through the test and Del (Hawtins Delicato) has never been to an indoor show like this so I was pleased with him. Getting off the horse in the arena and having an interview straight away took me back a bit but it was great to have the support of the crowd.”

Dujardin also stated, “the test I think for me, rides really fast. Halting at the bottom of the arena then going straight into half passes was not easy to get the test flowing. It was a bit bitty and quick coming. All the riders need to discuss it along with the judges and see what comes of it.”

Frederic Wandres said, “when I saw the arena for the first time, I thought it was just breath-taking. I was nervous about riding the new test but for me it rode well and my horse coped with the movements and felt really good.”

British judge Stephen Clarke commented, “yes the test was quite difficult as the movements come up quickly and are short – it is undoubtedly easier to judge than ride. But the evening as a whole was great; there was a good crowd and you could really feel the interest and enthusiasm – it was a good evening for the sport.”

German judge Katrina Wüst praised the interview and scoring presentation as “wonderful” to “create stars, make them visible” as other sports do.

The World Number One Dressage rider, Isabell Werth, did not compete at Olympia, nor rode the shortened Grand Prix test, but voiced her opinion about it at the CDI Frankfurt a few days ago.

“This is not the option for me. It is not the truth we will get more media and more spectators because we cut the test,” Werth told Dressage-News. "We have six minutes for the Grand Prix now and to do it in three minutes makes no sense.  The most important thing it is worse for the horses because we can’t show the horses in the way we should show them. First of all, we have to show basics and we have to show the Grand Prix exercises in a proper way. In three minutes it is rush, rush, rush. It will be more difficult for the weaker nations than for the top nations. I’m sure it makes no sense at all. I am quite sure it can’t be the future.

Is it Wrong to Have a Shortened Grand Prix Test?

Many dressage fans with the sport close to their heart have been very negative about this test project, especially because vital movements which test the essence of dressage (harmony, relaxation and lightness) have been scratched from the test (halt-rein back, zig zag, difficult pi-pa transitions). As long as the FEI chooses to sacrifice the spine of the sport over "entertainment" (and thereby going against animal welfare), it will rightfully provoke such negative reactions.

The FEI and its stakeholder clubs keep many aficionados frothing at the mouth because of their consistent work ethic of behind-closed-door decision taking by a select group of the same people, over and over. Changes are consistently introduced to the riders, press and those involved as surprise decisions. No democratic, open process, no open discussion, no time for digestion and proper reflection whether the project will work or whether it has any flaws.

It's typical human behaviour that there always just a few people who are the work horses and willing to invest the time and effort to develop something new and accomplish change, while the others sit back and relax, yet spout criticism from the comfort of their chair. However, the same people turn up in different FEI working groups and not all of them uphold the maxim of classical dressage. They prefer to sacrifice the core of the sport for the sake of marketing and entertainment. It makes one wonder why not more classical dressage bannermen are involved in these working groups! Are they not invited, or not willing to do the work?

There is nothing wrong with (re-)introducing a short Grand Prix for the World Cup. In principle it might be better that the horses are spared from a heavier test before doing the kur to music on the World Cup circuit during the winter months. The spring and summer outdoor season are demanding enough on the horses. The Short Grand Prix used to be in place as the qualifier for the freestyle, but was scratched in the noughties and replaced by the classic Grand Prix. It could easily be re-introduced, but it should not count for anything more than sorting the order of go for the freestyle the next day.

The main issue with a shortened Grand Prix test (no matter if it's the old or new short Grand Prix test) is that it CANNOT have the same weight as the classic Grand Prix test: not for FEI World Ranking Points, nor Olympic Qualification, nor MES scores. The test is "easier" so should not count for any type of points or qualification scores. If riders choose to do the World Cup circuit, the freestyle and its prize money are the reward.. not the points earned.

The whole World Cup circuit is already based on an unlevel, invitation-only entry system. Riders of the smaller dressage nations hardly ever get the opportunity to compete in a Western European League qualifier, so why give the same faces which we see non-stop at the World Cup show, an easier platform to score ranking points and qualification scores?

A line needs to be drawn. Either you want to play with your horses in the World Cup, or you do serious dressage in the classic circuit. The World Cup is based on the freestyle, a (circus) test in which you can hide your horse's weakness and for which the judging system still fails as the musical part of the test is based on a largely subjective score.