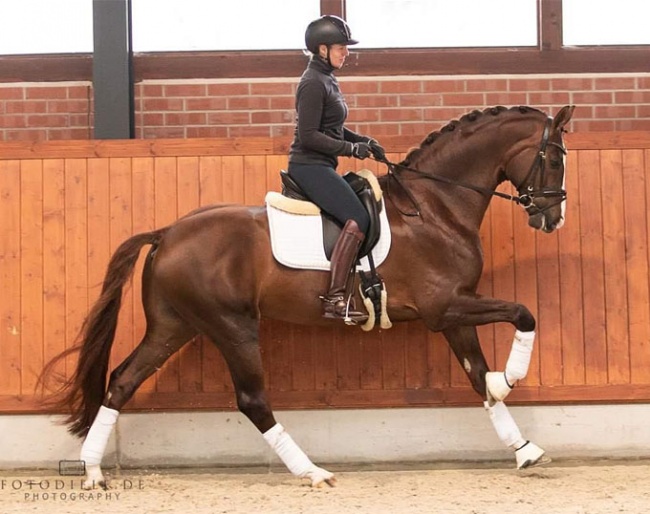 Less than one week after arriving at Helgstrand Dressage as a new sales horse, Gunner KS caught the eye of Brune and sold virtually on the spot.

He was first competed by Laurens van Lieren and then Dana van Lierop got the ride. Van Lierop and the liver chestnut competed at the 2016 and 2017 World Championships for Young Dressage Horses. In 2016 he finished 28th in the 5-year old preliminary test but did not start in the consolation finals. In 2017 he was 7th in the 6-year old Finals. In 2018 he missed out on the World Championships due  to an injury. In February 2018 he returned to win the 2018 KWPN Stallion Competition Final in Den Bosch.

Six months ago Madeleine Witte-Vrees took over the ride. Owner Kleijwegt sold Gunner KS to Helgstrand Dressage at the beginning of December.

Brune discovered the stallion when Brune dropped off her own Di Magic, which she had sold to Helgstrand.

"I went to Andreas to bring Di Magic and I saw Gunner there in the arena and directly fell in love with him," Brune told Eurodressage. "He had just arrived and was not presented for sale to me. I kept on nagging Andreas to let me ride him, and so he let me. I told him that I exactly found the horse I was looking for. I am good friends with Dana (van Lierop), so I followed the horse for a while but thought he wasn't for sale."