Hotline and Rockefeller Move to Canada 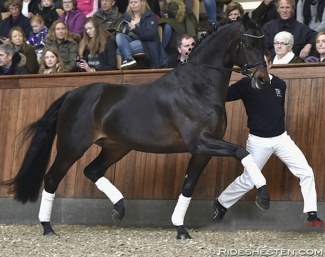 Blue Hors stud's licensed stallions Hotline and Rockefeller are moving to Canada. The two sires have been sold to Jen Arnoldt of Dreamscape farm in British Columbia.

Canada is collecting an impressive string of licensed stallions for the 2019 breeding season. After the recent acquisitions of Zhivago and Wynton by Canadream Farm, Arnoldt recently invested in the Celle state stud Spörcken and she has now added two, more impressive stallions to her line up, Rockefeller and the elite stallion Hotline.

The 13-year old Oldenburg bred Rockefeller (by Rohdiamant x Grundstein II)  has experienced much competition as a breeding sire in Europe from several of his licensed full brothers, including Romanov and Rubin Royal. Rockefeller never had a sport career as he broke his pedal bone at a young age and was always presented in hand at stallion shows.

The 15-year old Hanoverian stallion Hotline (by Hofrat x De Niro) has made his mark in Germany and Denmark and is a proven elite sire. He was named 2016 Danish Stallion of the Year and is currently ranked nr 20 on the WBFSH Dressage Sires Ranking. In 2018 Hotline was leased to the Warendorf state stud but they did not extend the lease for the next year.