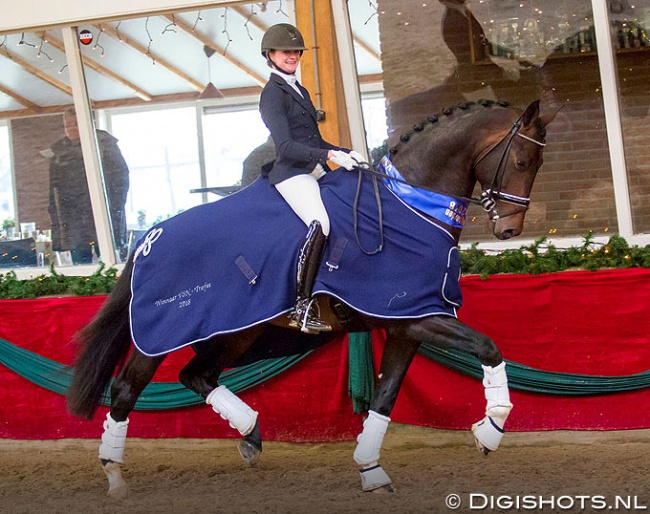 Marieke van der Putten and Keano RS2 became the winners of the 2018 VSN Trophy Finals held in Kootwijkerbroek, The Netherlands, on 27 December 2018.

The VSN Trophy Finals is a dressage talent spotting competition for 3-year olds with a qualification round and a finals. A group of 25 horses competed in the Finals on 27 December 2018. The judging panel this year included Leunus van Lieren and Theo Hanzon with Thamar Zweistra test riding the five highest scoring horses of the first round.

Keano (by Governor) was second in the first round with 43 points after receiving 8 for walk, 9 for trot, 8 for canter, 9 for rideability and general impression. However, he convinced test rider Zweistra of his rideability and gaits and scored a 10 under her, bringing his total to 53 points for the overall victory. RS2 Dressage acquired the bay Keano in August after he was spotted in a clinic by Van der Putten.

"I'm so proud of this horse," van der Putten took to Facebook. "Every day it's a joy to ride him and also today he showed off his qualities more than enough."

The second placed horse was Kevin Costner Texel (by Negro), presented by Emmelie Scholtens. He received 7 for walk, 8.5 for trot, 9 for canter and rideability and 8.5 for general impression. He also scored a 10 under Zweistra, bringing his total to 52 points.

Diederik van Silfhout steered Kingly Utopia (by Expression) to a third place overall. The horse earned 8 for walk, 9 for trot, 8 for canter and rideability and 8.5 for general impression. Zweistra rewarded the horse with a 9.5, which brought his total to 51 points.

Kenndale (by Everdale), who finished first in the first round after earning 8.5 for walk, 8 for trot, 9 for canter rideability and general impression, scored 7 for rideability under Zweistra, and landed a fourth place with 50.5 points.

Kaiman (by Dark Pleasure) was the fifth horse that was test ridden by Zweistra, ended up tying in fourth place at the end with 50.5 points. This horse earned 8 for walk, 8.5 for trot, 9 for canter, and 8.5 for rideability and general impression under his own rider.