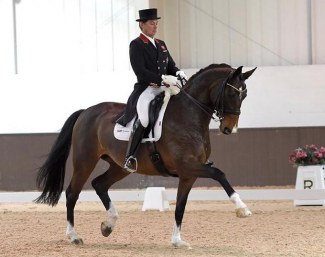 Who better than a pair of WEG medalists to kick off the 2019 British dressage show season, and celebrate the rejuvenation of Addington Equestrian? With Emile Faurie and Charlotte Dujardin leading the pack, the first High Profile of the year didn’t disappoint with no less than 23 riders capturing wins at the premier Buckinghamshire venue on 11 – 13 January 2019.

Taking to Facebook to praise his talented partner Emile commented, “Couldn’t be happier and so excited for this mare’s future!” With the Senior European Championships taking place at Rotterdam in August, Emile will surely be looking ahead with promise.

Notching up four wins throughout the weekend, Charlotte Dujardin made her mark on the small tour classes with her two eight-year-old mares, Emma Blundell’s Mount St John VIP and Sarah Tyler-Evans’ River Rise Nisa. Each horse topped a Fairfax Saddles Prix St Georges and Intermediate I but it was River Rise Nisa to earn the highest score of the show – a supreme 77.19% in Saturday’s Inter I – though Mount St John VIP was hot on her heels earning 76.40% for her win at the same level.

Speaking about VIP’s success on Facebook, proud owner Emma said “[I’ve] Loved her since she arrived with us as a beautiful foal! Thank you Charlotte for all your training and making her the amazing horse she is today!”

Local rider, and long-term friend and pupil of Charlotte, Jayne Turney enjoyed a successful three days with her string of rides. Shirley Rixon’s Starnberg-sired Penhaligon’s Jupiter showed his quality to win two classes on Sunday, the Prix St Georges with 71.54% and the Advanced Medium Freestyle with 72.89%.

Gloucestershire-based Charlotte McDowall started her 2019 campaign with 70.61% in the Junior Team test on board her new partner Alivia (by Olivi x Jazz), a former Grand Prix ride of Julie Hugo-Ross, and 2017 Junior European Championships team member Jade Ellery scored 67.37% to win the Young Rider Team test with her own Eloy.

British Dressage thanks the team at Addington Equestrian for an exciting start to a busy year, with a refreshed look, cafeteria and surfaces we can look forward to more upcoming fixtures including the Young Horse Forum in February and the Premier League show in the spring.