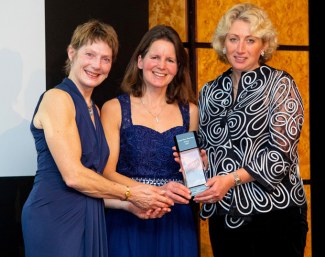 On Saturday 12th January 2019, breeders of the top British-bred horses from around the country converged in London at the Grange City Hotel, for the British Breeders Dinner and Awards Ceremony, organised by the British Horse Foundation (BHF).

There has been much to celebrate for British Breeding in 2018 and this glittering occasion affords the breeders of these potential world-class horses the special recognition they deserve.

Guests arrived at the Competition Stallions-sponsored drinks reception before moving on to a sumptuous four-course dinner.

The evening then moved on to the much-anticipated Awards ceremony, this year compéred by Harry Meade, taking over the role from the much missed and loved Mike Tucker, who was fondly remembered by Vincent Jones, Chairman of the BHF during his opening speech.

Young, professional and amateur breeders were well represented throughout the Awards Ceremony that began with the presentations of the British Breeding Futurity Certificates of Merit, amongst the winners was Sally Warner who was presented with an eventing foal certificate for Time to Fly, Penny Walster received the sports pony foal certificate for Bathleyhills Orion, whilst Tullis Matson collected the eventing yearling certificate of merit for Mesmerize-Me-SSH, on behalf of Solaris Sport Horses Ltd. Tammy Ruffles was on hand to be presented with her dressage yearling certificate of merit for Summer Solstice, whilst 2 year old certificates of merit were presented to Jennie Loriston-Clarke for Catherston Tick Tock (Dressage), Keith Lovelock for Masterclass (Show Jumping) and Elaine Coleridge Smith for WFD Diangello (Sports Pony); Karen Fryer collected her 3-year-old certificate of merit for Sunny Side Up (Eventing).

Young horse awards were then presented to breeders of the best British bred young horses in the three main equestrian disciplines; Dressage, Eventing and Showjumping that saw a range of breeders step forward to collect their awards.

The SPSS Award went to two British bred, SPSS passported and Elite graded dressage ponies, Ella and George Clooney B.S. both identically bred by Julie Lockey and who have represented Ireland and GB at the FEI Pony European Dressage Championships.

The Anglo European Studbook Award went to Summa’s Zorro, bred by Marily Power and Susan Lanigan O’Keefe in recognition of the horse winning the richest prize in showjumping, the $1,000,000 Spruce Meadows Masters.

The British Hanoverian Horse Society presented awards to the breeders of the best British bred Hanoverians that gained the highest points in International competition during 2018 in the disciplines of Dressage, Eventing and Show Jumping. Judith Davis was the BHHS dressage winning recipient as the breeder of Hawtins Delicato, GB team bronze medallist at the FEI World Equestrian Games.

Haddon Training continues to support the often ‘unsung’ heroes of the equestrian industry by its sponsorship the British Grooms Awards of which there are 5 categories: –

Lucy Seddon who works for Tom McEwen Eventing was the recipient of the British Grooms Award that was open to all grooms working in the UK equestrian industry; with Gabby Southern being awarded the runners-up prize who works at Catherston Stud.

The Team GBR Grooms Award was open to any groom who supported a senior Team GBR athlete at the FEI World Equestrian Games 2018 with the award going to Sarah Charnley, who groomed for Ros Canter, who was part of the GB gold medal winning eventing team and who also won the individual gold medal in Tryon.

Joe Castree was the recipient of the Team GBR Pony, Junior & YR Grooms Award, nominated by Jonquil Hemming, coach to the Pony Eventing team; Joe was key to managing the preparations up to the Pony European Championships and her ability in creating a calm environment in the stable yard during the Championships was instrumental to the GB Pony team winning team and individual gold medals.

The Manager Award was presented to Emma Jayne Eldridge, yard manager at Stallion AI Services, with the Apprentice Award going to Poppy Zofia Graves who is based at Wimbledon Village Stables, with a Highly Commended certificate awarded in this category to Connor McCunn who is based with Daniel Watson.

The culmination of the evening was the  Meritoire Lifetime Achievement Award; this annual award is presented in recognition for a lifetime’s contribution to the breeding industry.

The Award was presented to Jennie Loriston-Clarke, who received a resounding round of applause from everyone in the room, when it was announced who was the recipient for 2019.