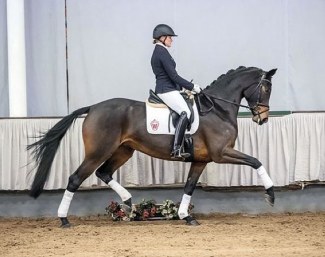 The 5-year old mare Africa became the top selling horse of the 2019 Westfalian Winter Auction in Munster-Handorf on 20 January 2019.

Africa (by All at Once x Quaterback) sold for 70,000 euro to Ellen Schulten-Baumer.

The second most expensive horse was the 5-year old mare Soraya (by Sunday x Rohdiamant) which sold to Christina Boos for 65,000 euro.

The 3-year old youngster Magic Boy (by Moses) sold for 34,000 euro to Korea with Yvonne Feistelmann doing the bidding.

The amount of 34,000 euro was also paid for Franziskaner (by Franziskus x Florestan), who moves to Bavaria, as well as for Simpel Red (by Sir Heinrich x Fidermark), who moves to Lower Saxony.

The best selling show jumper was the green 3-year old Cavendish (by Canturano x Come On) which switched owners for 30,000 euro. He will move to Holland.

Sixty horses were up for auction in this 2019 winter auction and they achieved an average price os 18,467 euro.