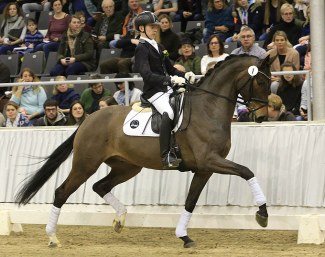 Der Keiler became the best seller of the first Hanoverian auction in Verden of 2019. The catalog number one achieved a sales price of 88,000 euro and after 78 horses being presented for auction the same day, that price was not topped.

The first auction of the year in Verden is the January auction which took place on 19 January 2018.

Der Keiler (by Don Index x Werther) was bred and presented by Count Carl von Hardenberg and sold for 88,000 euros a Belgian top dressage trainer, who has been a regular customer at the Verden Auctions for 25 years.

Belgians were on a shopping spree in Verden because eight horses sold to their country.

Fürst Benno (by Fürst Belissaro x Worldly - breeder: Klaus Kropp, exhibitor: Winfried Albers) was number two in the buyer's favour and was auctioned off to Spain by telephone for 75,000 euro.

Clemens (by Coupe d'O x Drosselklang II) was the best selling show jumper. The bay, who already has victories and placings up to 1,30 m, will move into a box in a Spanish show jumping stable for 29,000 euro.

The audience was very competent and open-minded, was to be heard from all members of the team of the training and sales centre of the Hannoveraner Verband.

34 horses achieved prices of 15,000 Euro and more and the average price at this auction was 15,801 euro. The export rate was almost 50 percent, 37 horses will leave Germany.