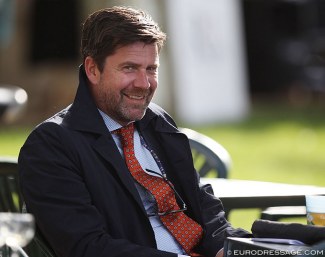 As president of the International Dressage Officials Club (IDOC), Hans Christian Matthiesen, a Danish 5* dressage judge, addressed the IDOC members in a New Year's letter which reviews the happenings of 2018 and addresses the challenges officials face in 2019.

In 2018 key events for the sport, in which experts met to decide the future of dressage, were a stakeholders meeting during the 2018 CDIO Aachen and the 2018 FEI General Assembly in Bahrain.

Matthiesen talks about both events in his letter and evaluates them from an IDOC perspective:

In July, during the CHIO in Aachen, we participated in an interesting stakeholder meeting. Katrina Wüst and I represented the Officials. Our main topic was better communication between judges, riders and trainers – and cognitive processes in the sport. Many people attended and the organizers decided to arrange another meeting next year in Aachen again.

Katrina and I explained some of the challenges of judging, and we strongly advocated for a more straight forward and honest communication between the different parties in dressage, especially between riders and judges. Bias is not only relatable for judges – everybody is biased and have more or less fixed opinions on training and judging etc. A part of being a judge is dealing with bias (cognitive processes) and avoid bias to have an influence on your judging. That’s not always the case for riders and trainers.. While riders and trainers are by essence biased (they do favor a particular training method).

At the meeting, it was also stated that some bias is accepted in our rules – e.g. ”starting order according to ranking lists” etc

In 2018, the FEI held its General assembly in Bahrain. IDOC would like to congratulate the new dressage committee member, our colleague Irina Maknami, 5* dressage judge from RUS, on her appointment. We wish her and the other committee members good luck, and we look forward to a fruitful cooperation with them. IDOC has always valued the communication and cooperation with the officials who are members of the committee - Andrew and Irina –, as well as the cooperation with the FEI Headquarters. It is crucial for our work in IDOC that we have the feeling that we are listened to, and that our proposals are brought forward in the committee for further consideration.

In Bahrain, the report from the DJWG was presented to the General Assembly delegates, including the FEI board members. I hope you have all read the report by now. It contains many important recommendations, and most of them relate to the current judging system. At this point, I would like to thank the members of the working group for their dedication and hard work. Many interesting and important points are being brought forward in the report, and IDOC looks forward to giving positive and constructive feedback. Many of the recommendations have already been tried out in one form or another, or we have experience with closely related systems. The working group has done an amazing job and looked into many aspects of judging and on how to improve the perception and understanding of our sport.

Probably one of most interesting and positive new recommendation was to try-out and implement the e-Judging system: no more paper test sheets; the scribe enters the marks and the comments directly into the computer system. With this system, made possible by modern technology, we have made a huge leap forward, and “transparency” was taken to another level. Announcing the results will be quicker, and it will be easier to understand why judges give different marks. At the same time, it also stimulates us to strictly adhere to the guidelines and always give clear and precise remarks to justify our scores. It is still up to the FEI to decide how much details should go to whom (riders, trainers, judges, press etc.) and when. Overall, the judges were very positive about this new system.

The Code of Points is another essential recommendation in the report. A dedicated working group has been set up to work on codifying the Grand Prix movements, with clearer descriptions of the levels, and with focus points and guidelines on how to assess each movement. When finalized and validated in real life situation, this should lead to a better understanding of judging. The Code of points will also work as an important tool in the education system.

The possibility to go into all these details and being open, honest and transparent will result in a better mutual understanding and thereby significantly reduce distrust and criticism.

For me, the most positive aspect is the possibility for self-reflection and evaluation. We now have tools at our disposal (the Dashboard), based on statistics, that tells us how we perform in comparison with our colleagues, how well we work together as a panel, and how often we happen to have larger differences with our colleagues. It’s my belief that the majority of us is more than open to evaluation. Statistics as a tool, together with more education (exams) and guidance (Judges’ Advisor Pannel etc) will prepare the judges in a much better way in the future. A new education plan has been proposed to the Dressage committee, which includes examination and evaluation at all levels. In the future we will be able to identify very specifically problem areas, and take action right away to correct them.

At the end of the day Code of points, e-judging and regular evaluations will eliminate the need for ”band-aids”, incl proposals such as Hi/Lo in the judging system.

In the future it is important that IDOC be represented in all working groups set up by the FEI, and that the working groups regularly consult the stakeholders groups at every stage of their work. Representatives, as the name imply, should represent the ideas and positions of the Clubs, and, in our case, the Officials. The cooperation is essential.

I believe that the Officials are open to new ideas and to change. It is important to stay loyal to core values of our sport, but that doesn’t mean that we can’t change things and systems for the better. Our support to e-Judging, new education plans, competency-based evaluation is a testimony of our willingness to embrace change. We want the best for our sport, but we need to work together.

The Officials group arguably has more experience than any other group with the competition system. That is why it is so critical that we are part of all working groups – after all any change has a huge impact on our role as official, judge or steward. Of course, we accept to be constantly scrutinized, but most officials work as volunteers in their spare/free time, and they need to feel safe, respected and supported by the system, and not constantly criticized.

Many people are focused on the ”bad” judging, but maybe it is time to focus on the ”good” judging – and statistically, there is way more ”good” than ”bad” judging. It’s only our own perception that tells us otherwise. All officials wants to bring the sport to new exciting levels without forgetting that protection of the horses and riders is of paramount importance.

Another important challenge for the future is the development of the Competency based evaluation system, which in time should replace the age-rule. It is essential that we come up in due time with good ideas and proposals on how to implement it. I firmly believe that all officials will benefit from this system. We are now ready to use some of the tools that statistics and results have given us. We are looking for a good system that will help and evaluate all judges, monitor the judging system and see to it that all officials stick to guidelines and rules. I believe this will take us another huge step forward. Establishing a system like that is a huge job and will take some time, nevertheless I expect the FEI will have something ready in 2019 already.