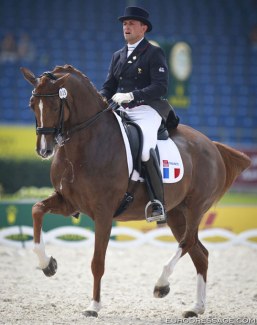 Badinda Altena is a 13-year old Dutch warmblood mare by Tolando x Goodtimes. She is bred in Holland by J. Timmermans.

Under Pierra Volla the talented chestnut mare made her international show debut as a young horse at the CDI Pompadour in 2012 and went on to represent France at the 2012 World Young Horse Championships in Verden, where they were 13th in the consolation finals.

They then disappeared from the international scene to make their CDI Grand Prix debut in Vidauban in 2015. As of then, the duo became a fixture on the French team competing at the 2015 and 2018 European Championships and 2016 Rio Olympics. They were the 2016 and 2017 French Grand Prix Champions and they won bronze at the 2018 French Championships.

In the summer of 2018 Volla shocked the French dressage world from refusing to ride on the team at the World Equestrian Games, which led to France not sending any rider at all to Tryon. Volla announced then that he was selling his horse.

Through Andreas Helgstrand, a new owner and rider has been found, the 32-year old Danish Charlotte Heering. This year she competed Black Pearl at small tour level and Joker Selection at Grand Prix level. In 2017 the talented Bufranco made her one of the biggest rising stars in Denmark, but the horse was not shown internationally in 2018.

"I'm super happy and excited for the future with my new star," said Heering. "She's a very sensitive lady and I still need to find the buttons, but what a mega talent and quality."

Volla will continue his Grand Prix career on the 13-year old Sir Piko (by Sir Donnerhall).