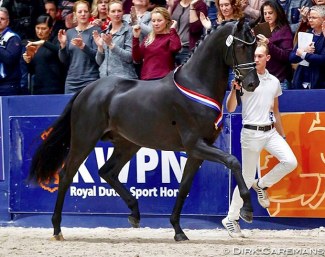 Crowd favourite Le Formidable was also the favourite of the judges and named champion of the 2019 KWPN Stallion Licensing in 's Hertogenbosch, The Netherlands, on Saturday 2 February 2019.

Forty-nine stallions in total have been approved for the mandatory stallion performance testing, before they are KWPN licensed and allowed to breed.

On Friday 33 colts successfully passed the second and third phase of the licensing and were accepted for the stallion performance testing. Four of them were selected for the premium ring.

On Saturday, the KWPN licensing committee, which included Arie Hamoen, Bert Rutten and Reijer van Woudenberg, added 16 more stallions that the lot approved for the performance testing. Three of them were named premium stallion.

There was no doubt that Le Formidable (by Bordeaux x Ferro x De Niro) would grab the title in the champion's ring, and so he did. Bred and owned by Saskia Poel, the black is also listed as co-owned by Karel Gerrits.

"Without disrespecting the other stallions, we can say that Le Formidable was the clear champion. He has so much nobility and elegance, moves with much balance and power from the hindleg. It was a pure joy," said licensing committee chair Bert Rutten.

The third ranked stallion was Lance VOD (by Glamourdale x Davino VOD), bred by Ad van Os and owned by the breeder in partnership with Gert-Jan van Olst.

The approved stallions at the 2019 KWPN Licensing are: