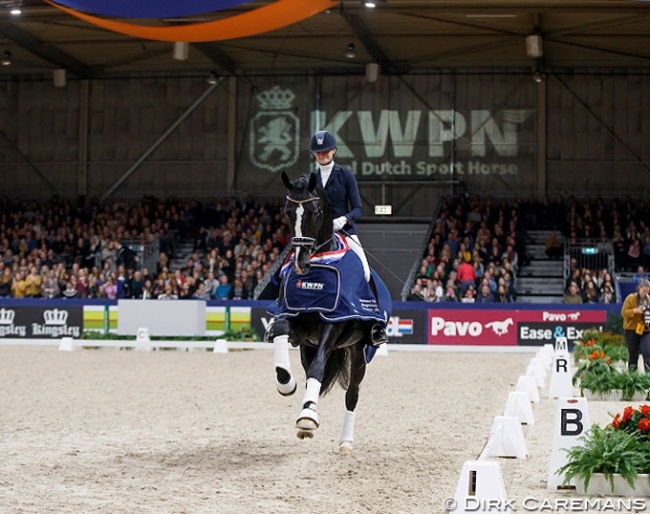 The 5-year old Jameson, the 6-year old Imposantos and the 7-year old Hermes became the winners of the 2019 KWPN Stallion Competition Finals held in 's Hertogenbosch, The Netherlands, on Friday 1 February 2019.

The finals were judged by Dutch 5* judge Mariette Sanders-van Gansewinkel and Toine Hoefs.

In the L-level division, Marieke van der Putten and Jameson (by Zack x Negro) were unbeatable. The black 2017 KWPN licensing champion scored a 10 for canter and a 9 for trot. In walk the judges wanted to see more ground cover despite the clear rhythm. Franka Loos and Jayson (by Johnson x Negro) became the reserve champion with a total of 80 points. He was praised for the power in his canter but needed to have a bit more length in the neck. Five stallions in total competed for the title, but thirteen stallions in total competed in this class in Den Bosch.

At M-level Bart Veeze and the black Imposantos (by Wynton x Krack C) captured the title with 94 points in the finals. The stallion raked in several 9.5 marks for his presentation. Emmelie Scholtens and the bay Indian Rock (by Apache x Vivaldi) became the runners-up with 89 points. The canter was praised as highlight gait of the 2016 KWPN licensing champion. Four stallions competed for the title but eight more stallions were presented there.

In the smaller Z-level division, Dinja van Liere and Hermes reigned supreme with 88 points. The Easy Game x Flemmingh offspring scored a 9 for harmony and was praised for his suppleness and cadence in canter. Van Liere finished second on her second horse, Geniaal (by Vivaldi x Biotop), with 88 points. He got a 9 for trot and canter. Just two horses competed in the finals, while three more were presented in the class