Dufour and Cassidy Return to Winner's Circle at 2019 CDI Herning 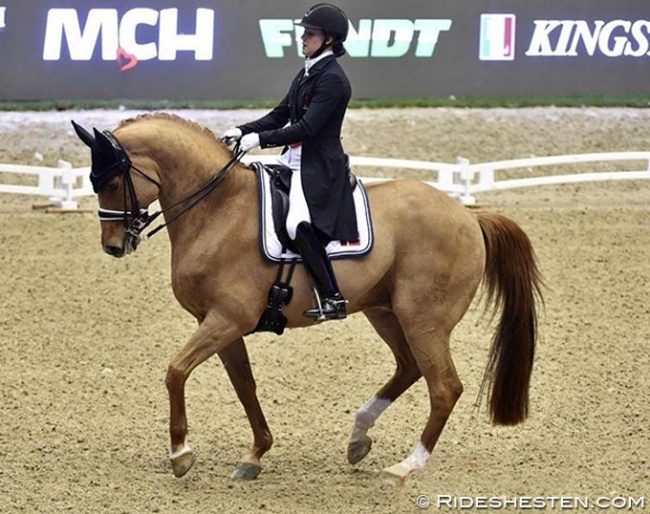 Denmark's number one dressage pair, Cathrine Dufour and Atterupgaards Cassidy, have returned to the international arena after a break due to injury and are straight back into the winner's circle. At the 2019 CDI Herning in Denmark, Dufour scored 79.065% for the victory in her return Grand Prix.

Dufour and her 16-year old Cassidy (by Caprimond x Donnerhall) missed out on the 2018 World Equestrian Games due to an injury. The chestnut is now back in shape and hasn't unlearnt the tricks of dressage.

The highly sympathetic duo rode a beautiful Grand Prix test. Cassidy is not the most ground covering mover but the effortlessness with which they move through the program is an embodiment of excellent dressage. Cassidy has really improved in the piaffes: he stays on the spot, moves the hind legs under, and keeps a good rhythm although the suspension is not that great. Over the years the passage has become the weaker point and also now the horse swings too much with the hindquarters instead of staying strong in the topline and pushing the hind legs under. However the regularlity is good and the horse remains in a soft bridle contact. The extended walk was very good. The zig zag and tempi changes were solid, but in the extended canter he got very frisky at the beginning of the diagonal and inserted an unscripted flying change. They showed a small left pirouette, but the right one was too big with not enough collection and sit. In the trot extensions there is proper lengthening of stride and frame, though the horse's mileage is starting to show a bit behind. The passage on the final centerline had nice activity but was too swingy in the hindquarters. Cassidy crept forward in the piaffe at X and also the end halt was not immobile, but overall it was a lovely come back test.

The judges' panel in Herning included experienced judges Christensen, Kessler, Wessels, Baarup, and Colliander. It is very interesting to see how they score with return and new combinations, also on home turf. They were not in the greatest unison about Dufour with marks ranging from 77.609% to 80.761%. Three had her first, two second.

Danish Daniel Bachmann Andersen and his second Grand Prix horse, the 11-year old KWPN stallion Blue Hors Don Olymbrio (by Jazz x Ferro), landed second place with 78.283%. The small liver chestnut stallion, who makes Bachmann look very tall, showed big trot extensions, but his nose needed to come in front of the vertical instead of staying behind it. The half passes were good as well as the first passage. In the first piaffe the stallion sat well, but lacked some impulsion. The extended walk had one and a half hoof overtrack and is not the most ground covering but the rhythm was clear. In the second piaffe the rhythm was better, but the hindlegs needed to move more towards the point of gravity in passage. Don Olymbrio looks very comfortable in the canter work: sweet controlled two tempi's with especially the right ones very uphilll, a very balanced zig zag, and a small left pirouette. The right one was a tiny bit big. On the final centerline there was a nice floaty passage until X, a good piaffe which was maybe a little bit forward. However the stallion lost the hindlegs in the last bit of passage before G.

With the sale of Deep Impact, the dressage crowd was eagerly awaiting the Spaniard's come back to the Grand Prix ring with a next horse from Helgstrand Dressage's sale stable. The 9-year old Danish warmblood mare Fiontini (by Fassbinder x Romanov) is his ticket. No time wasting at Prix St Georges level for this horse. After winning the World Young Horse Championships three years in a row, it was straight into the Grand Prix ring for her. And she makes it look like she has been doing it for five years!

Jurado and Fiotini showed impressive trot extensions with good overtrack and massive freedom in the shoulder. The half passes were good, yet with a restless tail. The elasticity in the one to the right is visibly better.  The passage was elegant and off the ground, sometimes a bit uneven with more engagement from the right hind, but the transitions in and out of piaffe were smooth. The piaffes were nicely on the spot and rhythmical but sometimes a bit croup high and leaning on the forehand. The extended walk had two hooves overtrack, but got slightly hurried in the rhythm. In the two tempi changes there was much swinging in the hindquarters. The extended canter should be more uphill. In the zig zag one saw the mare again struggle with the half passes to the left and she tilted the head.  The one tempi changes were fault-free, but croup high. The mare made a small pirouette to the left but she changed lead at the exit. The right pirouette was too big. There was still much energy in the tank on the final centerline, but Fiontini tilted the head to the left in the passage. The end halt lacked finish in the execution. It is impressive to see a 9-year old mare so confirmed at Grand Prix level, but overall the image would be even nicer if she was ridden with the nose more out. She is consistently held behind the vertical and could be more scopey with some opening in the throat latch and the poll up.

The judges were clearly not on the same wavelength about this ride. Fiontini scored 75.913% but her individual scores ranged from 71.739% to a whopping 79.130%. The judges had her between second and fourth place.