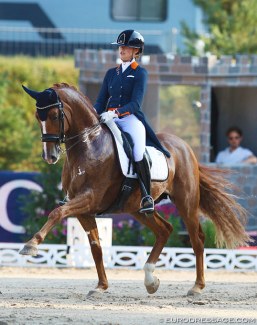 He was originally licensed at the 2009 Westfalian Stallion Licensing but was focused on sport.

The chestnut was first competed in the spring of 2010 by Jana Freund and she took him up to L-level in three years.  Van Zwambagt took on the ride in 2013 making the transition from ponies to junior level with the horse.

The chestnut was quite temperamental at the start with Van Zwambagt and not always as easy going in the show ring, which promoted Dutch selectors not to take the pair on the team. The stallion was gelded.

When the combination started to show continuity and reliability they were selected to represent The Netherlands at the 2016 European Junior Riders Championships in Oliva Nova, Spain, and won team silver and Kur gold. In 2017 they were not selected, but in 2018 they returned on the team for the European Young Riders Championships in Fontainebleau, and won team silver, individual test silver and kur bronze.

Febe last competed Las Vegas at the 2019 CDI Le Mans in February. She still has the ride on the 9-year old KWPN stallion Fyeo (by United x Jazz), owned by A. Both and S. Kat.