Shivers: Disease, Diagnosis, Treatment and is it Hereditary? 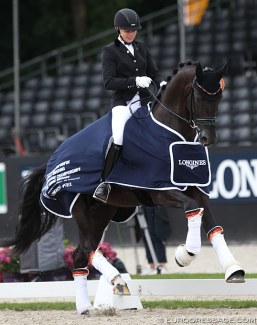 The news about World Young Horse Champion and licensed breeding stallion Don Martillo suspected to suffer from shivers raised major concern amongst breeders, whether the news is true and the disease hereditary.

So far none of the vet reports substantially sustain Von Depka’s claim and the dispute seems more a rift between two owners in which one party has taken the matter public.

Shivers or shivering are names that have been applied to a chronic neuromuscular syndrome in horses that has been recognized for centuries. It has been stated that the condition is reasonably common, uncommon, and rare to very rare.

Both genders can be affected, but geldings are three times more likely to be diagnosed with the disorder. Horses over 16.3 hands tall are also more susceptible than shorter horses.

The Signs of Shivers

Many horses that hold a hind limb flexed and tremble are said to have Shivers. However, a number of disorders can create irritation in the hind limbs of horses and cause this type of sign.

The classic disease called Shivers is a gradually progressive, chronic neuromuscular disease in horses that is characterized by gait abnormalities when backing up. Other typical signs include trembling of the tail while held erect, trembling of the thigh muscles and a flexed and trembling hind limb.

The clinical spectrum of shivers in horses is very variable in the degree or manifestation of signs. The diagnosis of a characteristic case of Shivers seldom presents a problem, however the signs of Shivers may be intermittent, occasional, or latent and very difficult to confirm. Shivers may be extremely difficult to detect in the early stages, and careful observation may be required before the diagnosis can be made. The disease primarily affects one or both hind limbs with or without tail elevation and trembling.

The most characteristic signs of Shivers occur when an attempt is made to move the horse backwards. Mildly affected horses show tenseness or trembling of the hind limbs and sudden jerky extensor movements of the tail that cause it to elevate.

There are two primary categories of Shivers signs observed while backing:

In more severe cases, hyperflexion and other signs of Shivers will become apparent during forward walking. However, these signs are not consistently observed and will often only appear during the first several steps or when turning sharply. Signs are not apparent at the trot. Even in well-developed shivering cases, signs may not be seen when the horse is standing still.

Horses with Shivers are usually also resistant to having their hind feet lifted manually, and may hyperflex the opposite hind leg before flexing and abducting the hindlimb being touched. These signs may occur when the hind feet are picked up to be cleaned or when the horse is being shod, especially when the foot is hammered during shoeing.

How Do I Know if My Horse Has Shivers?

Shivers is straightforward to diagnose when signs are clear, however, milder cases are more difficult to diagnose. If your horse exhibits muscle quivering, difficulty in backing up, discomfort while being shod on hind hooves, or other signs of Shivers, have your horse evaluated by your veterinarian. A veterinarian must rule out any other possible causes of lameness, as some painful conditions mimic signs of Shivers, especially if only one limb is involved. There are often no abnormalities on serum biochemistry profiles and usually muscle enzymes such as CK and AST are normal.

Stringhalt is the condition most often confused with Shivers. Stringhalt is characterized by a spasmodic and excessively rapid flexion of one or both hind limbs, which occurs when the horse is made to move, best seen in the slower paces and particularly in turning or backing. In stringhalt, the hocks are flexed suddenly and violently toward the abdomen and are then brought forcibly and noisily back to the ground in one quick motion as the leg is advanced. The hind limb motion may be mild as a slightly excessive flexion, to violent movements during which the fetlock or toe will contact the abdomen, thorax and occasionally the elbow with attempted steps leading to a peculiar “bunny hopping” and plunging type of gait.

The ultimate causes of Shivers remain unknown. However, an extensive study published in February of 2015 revealed that the brains of horses with Shivers are damaged in a specific area of the cerebellum, a part of the brain largely devoted to regulating muscular activity.

Horses with Shivers often move forward normally and can even reach high levels of athletic competition, but have extreme difficulty with less natural gaits such as backing up or lifting a hindlimb. Studies suggest that these slow, learned movements are regulated by a cerebellar pathway separate from spinal circuits involved in faster, natural forward gaits, providing a possible explanation for the unique deficits seen in Shivers.

Shivers is also characterized by uncoordinated, jerky muscle contraction or myoclonus, an effect linked to cerebellar damage in human studies. Furthermore, the muscles of horses with Shivers show a significant change in fast twitch type 2x muscle fiber type similar to horses in intensive training. While normal horses acquire these fiber changes through exercise, horses with Shivers lack the “off-switch” the cerebellum normally provides for muscle contraction, causing the muscles to constantly be active.

Researchers have noted that the breeds of horses affected by Shivers also have particularly high coincident rates of polysaccharide storage myopathy. However, a study done by researchers at the University of Minnesota showed that the PSSM in Belgian Draft Horses does not have a direct relationship with PSSM and their appearance in the same horse is likely coincidental rather than causal. Some horses with PSSM may have some abnormalities in their gait but the classic signs of Shivers are more likely related to abnormal cerebellar function than a muscle disease.
More on PSSM: Type 1 PSSM - Type 2 PSSM

Because Shivers is breed-related, there may be a genetic basis or predisposition for the disorder. Reports from past centuries suggest that shivers was prevented by breeding away from the condition. In some countries, it is recommended that stallions with this disease not be used for breeding purposes.

How Do You Treat Shivers in Horses?

There is currently no effective treatment for shivers. Occasionally the signs may improve especially with turn out and exercise but they may also regress during painful or stressful situations and when stalled.

It has been suggested that dietary treatment of affected draft horses with a high-fat, low carbohydrate feed may be beneficial if instituted early in the course of the disease. However, the clinical signs of shivers in horses did not resolve when affected Warmblood or Warmblood-cross horses were fed grass hay and their dietary grain was replaced with a high fat supplement. These dietary recommendations were combined with a gradually increasing daily exercise program and maximal turnout.

If a horse has both PSSM and Shivers, owners have reported improvements in their horses by feeding a diet high in fat and low in starch. This does not appear to cure horses from shivers but it may reduce the frequency of muscle spasms. Adequate levels of vitamin E are important. Vitamin levels in serum should be checked (blood taken, the blood tube protected from light, kept chilled and spun down as soon as possible). If vitamin E levels are below normal limits then supplementation is recommended. This will not change the current signs of shivers but it may possibly slow progression to ensure the horse is not deficient. The natural liquid form of Vitamin E, Elevate™, NanoE™ provide faster increases in serum vitamin E than powdered acetate or synthetic Vitamin E. Massage and acupuncture may be helpful in keeping a horse comfortable and competitive.

It may be harder for Shivers horses to maintain muscle mass if they receive time off from work. Horses may become tight behind, and may take longer to get the horse back in shape if laid up. As such, keeping horses in work with constant turn out seems to help. Symptoms were relieved the more these horses moved around.

What is the Prognosis?

When discussing prognosis we are referring to a definition of shivers that involves difficulty backing up. Many athletic horses that have shivers can perform at a high level. However, there are other horses that begin to show signs at a young age (2 - 3 yrs-old) that are quite severe and these horses ability to perform is clearly impacted. The impact can be most notable in sports like dressage where fine motor control is important especially at upper levels and in driving where horses must be able to back into a hitch.

In the short term (a few years) shivers may not impact performance. In the long term, (many years) half of shivers horses will show gradual progression from difficulty trimming hind hooves to difficulty cleaning the hind feet out to difficulty backing and then potentially hyperflexion intermittently at a walk. As this progression occurs there may be a drop in the level of performance.

It is impossible to predict which horses remain static and which horses will progressively worsen and how quickly progression will occur. Shipping, painful events like canker, lameness and stall confinement can all make shivers temporarily worse. In some cases shivers may result in euthanasia because of profound apparent discomfort, and incapacitation associated with episodic muscle cramping.