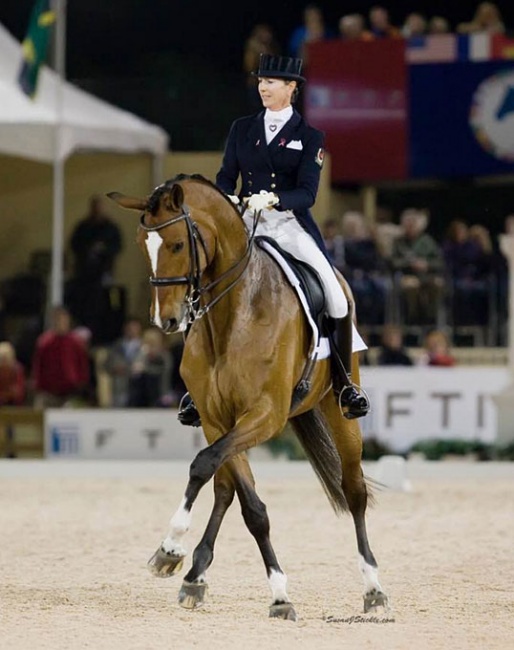 Shannon Dueck's 2010 WEG team hopeful Ayscha has passed away in Germany. She was 18 years old.

Ayscha was an Oldenburg mare by Welt Hit II out of African Dream (by Rouletto x Aktuell x Futuro). She was bred by Christian Bökhoff.

The mare was first competed in 2006 by Frederike von Waalden and Viola Abrahams after which she sold to Canadian Shannon Dueck.

She was Dueck's Canadian team hopeful for the 2010 World Equestrian Games and 2012 Olympic Games but they missed out on a team spot.

Dueck competed the mare consistently from 2010 till 2012, but in the middle of their Olympic run the mare developed issues that have short-circuited her sport career since then. She was off for the summer of 2012 and in March 2013 Ayscha developed an acute fever of unknown origin and spent two weeks in the equine clinic with a pneumonia. She returned for one CDI in 2013 at Saugerties in August. Ayscha then sustained a tendon injury.

At that time Jen Vanover of Maplewood Warmbloods  expressed an interest in adding Ayscha to her breeding programme and Ayscha was bred to Franziskus with MW Angelika as a result.

The baby break and R&R at Maplewood made Ayscha recover and Dueck had planned on a Grand Prix come back in 2016, which happened but only on a national level. The pair returned to the arena in July 2016 at the Wellington Classic Dressage in the Tropics and scored 66.974%. They went on to ride a few national tests in December that year. In the spring of 2017 Missy Gilliland acquired Ayscha and competed her at one national show at fourth level.

Because Ayscha's physical and mental health for sport was not up to par, the sale was undone and Ayscha was retired. She was shipped to Viola Abrahams in Germany, where she spent her time in the field.

Ayscha was in foal to Emilio, but over the last few weeks her condition suddenly deteriorated with eating problems as well as muscle spams. Despite all medical help, the mare could not be saved and was euthanized.

"I am devastated to say we have lost her while in foal in Germany," said Shannon. "She tried her heart out for me no matter how scary the venue, from Wellington to Wiesbaden. My deepest thanks to my friend Viola Abrahams who found her for me as a green 6 year old, and cared and loved her as her own for the last year and a half. I am so so sad to have lost her. She will live on in her beautiful filly Angelika."