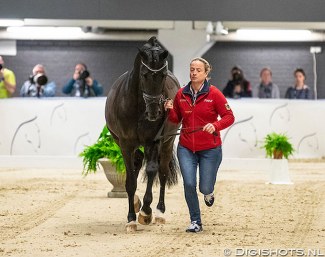 Dressage is ready to kick-off at the 2019 World Cup Finals on Friday 5 April 2019 as all horses passed the inspection on Thursday morning held in one of the Scandinavium indoor arenas in Gothenburg, Sweden.

The trot up took placet in a warm-up ring on normal footing that was rolled for the occasion. All 18 competing horses passed the trot-up with ease.

Russian Regina Isachkina had her hands full with her tall black stallion Sun of May Life who decided to snack on the decorations mid-jog as well as rear at the final stretch.

German Isabell Werth is set to defend her title with Christine Arns-Krogman's Oldenburg mare Weihegold (by Don Schufro x Sandro Hit) but will feel fierce competition from a strong American contingent with Laura Graves and Kasey Perry-Glass giving her a run for her money. Also Daniel Bachmann Andersen is one to watch for a podium place in Gothenburg.

The 2019 World Cup Finals start off with the warm-up Grand Prix on Friday 5 April at 13h00. The ranking of the class will determine the reserve starting order for the Kur to Music Final on Saturday afternoon 6 April 2019.