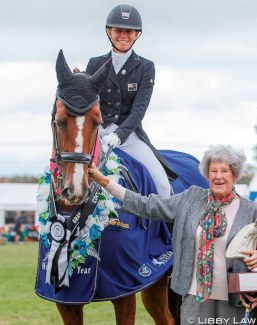 Successful New Zealand rider Wendi Williamson is preparing to travel across the ditch to be young horse guest rider at Australia's most prestigious international dressage event, the 2019 Sydney CDI.

Williamson will travel to Sydney fresh from her win in the Grand Prix event at the CDI3* Horse of the Year show in her home country, and will bring with her 11-year-old Grand Prix horse, Don Amour MH to compete at Sydney International Equestrian Centre (SIEC) from May 1 to 4. Wendi is also competing on Decadance in the CDI Small Tour competitions.

Williamson has competed previously at Sydney CDI with Watergate at Inter I level and Dejavu MH at Inter I a few years later . She said she is looking forward to what is a tough international standard of competition.

"In 2017 I took Dejavu MH to Europe and competed at five shows, mostly four-star events," she said. "Sydney in terms of venue, organisation and competition is right up there with what I experienced in Europe. It's very exciting to come across and compete."

Williamson is a member of the New Zealand High Performance Dressage Squad on Don Amour MH, the third horse she has trained to Grand Prix from young horse level and the half brother to Dajavu MH who represented New Zealand at the World Cup finals in Omaha (USA) in 2017.

She combines training and competing her dressage team with working full time as a contaminated land specialist providing advice to corporate and developer clients across New Zealand and each year with husband Jon, purchases foals from the successful Hanoverian breeder Matthews Hanoverian in Kaitaia, New Zealand.

Williamson currently has a string of young horses from newly started two-year-olds, 3-year-olds and the competition horses of which there is a team of five including a six-year-old (Level 4), two seven-year-olds (Level 5), and a nine-year-old (PSG) in addition to her GP mount.

She said she will be looking for horses "interested in working" when she takes on the task at Sydney CDI.

"It takes such a lot of training to get to GP, they have to have a willing attitude," she said. "I also want a naturally supple bodied horse that has a good natural balance and free moving paces. It's a big wish list, which is why I put attitude first because as much as I would love all my youngsters to be the full package, reality is they are quite hard to find so often we have to compromise in some aspects.

"I don't have a big budget for buying horses so I buy my youngsters as foals," Wendi added. "This can be a bit tricky so I go for bloodlines I have experience with and sometimes step out of my comfort zone and buy something a bit different. I have a good relationship with a breeder. I trust Matthews Hanoverians and we discuss which crosses are working well from a riding perspective. I like my youngsters a bit quirky too as I feel they have to have something with their personality that helps them enjoy or have fun in their job."

Several other New Zealanders are set to compete at this year's event, with both Williamson and Christine Weal (Schindlers Liszt) accepted for the FEI CDI 3* Small Tour Competitions while Victoria Wall (Letty Lei EDH) will line up alongside Williamson for the FEI Grand Prix CDI3* competitions.

This year's Sydney CDI will feature competitions spanning levels from Advanced to Grand Prix, attracting top riders from around Australia. Included in the line-up are CDI 3*, CDI-U25 (for riders under 25 competing at Grand Prix level), CDI-Y for Young Riders 16 to 21 years, CDI-P (International Pony) for riders aged 12-16 years and for the first time, a CDI-J for Junior riders aged between 14 and 18 years.

The Sydney CDI Young Horse Championships will also be decided, with a special guest rider providing commentary on the finalists.