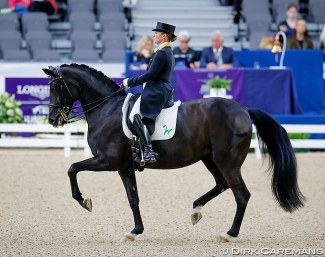 Isabell Werth and Weihegold have set the tone for what promises will be a glorious Kur to Music finale at the 2019 World Cup Finals in Gothenburg, Sweden. Werth won the Grand Prix class and left American rivals Laura Graves and Kasey Perry-Glass well behind her.

The Grand Prix at the 2019 World Cup Finals kicked off on Friday 5 April 2019 at 13h00 with Irish Judy Reynolds and her 17-year old Vancouver K as first pair into the electric Scandinavium stadium arena. The Grand Prix serves as a warm-up class to determine the starting order for the actual freestyle finals.

Isabell Werth and Christine Arns-Krogman's 14-year Oldenburg mare Weihegold (by Don Schufro x Sandro Hit) began with a safe but correct first trot extension, the trot half passes covered much ground. The second trot extension did not achieve sufficient overtrack. The first passage was very expressive and off the ground, the first piaffe was on the spot but had a slight backwards tendency and the mare got a tiny bit tense in the exit to passage. In the extended walk, she achieved a clear two-hoof overstep, but the 4-beat rhythm was mediocre. In the collected walk the mare got quite short, but kept the clarity. The second passage was sharp, but the second piaffe had a clear backward tendency although Werth waited patiently not to overask the horse so that the transition out would not be disturbed. The canter strike off was a bit edgy. The two tempi changes were well ridden. There was much power in the canter extension. The zig zag was ground covering, but could have been more supple. The one tempi changes were uphill but never really ground covering. The pirouettes were small and the left one looked the most confident. The third trot extension was not as swingy through the back, but Werth and Weihegold nailed the final passage on the centerline and the piaffe at X certainly was the best one of the three. Werth scored 81.755% for the victory although the judges were not unanimous in having her first. Their marks were between 78.152% to 83.804%. Those who have followed the career of the German queen of dressage know that was just the start of it. She will ride with the knife between her teeth in the freestyle. Today in the Grand Prix she proved that she has her horse on form for that coveted fifth World Cup title.

American Laura Graves and her 17-year old KWPN gelding Verdades (by Florett As x Goya) won all three North American World Cup league qualifiers in Wellington and have been Werth's biggest rival the past three years. Unfortunately today the pair could not (yet) retrieve their Wellington form to throw down the gauntlet on Werth, as Verdades appeared slightly too tense and sharp in the test, which led to Laura not stepping on the throttle fully. It led to a lovely test but it wasn't foot perfect. Verdades' first trot extension was powerful. The trot half passes were huge. The rein back wasn't square. There was a loss of rhythm in the middle of the second extended trot. The first passage was not as convincing, lacking some collection and understep from behind. The transition into piaffe was hesitant and the horse moved the hindlegs out. The second part of the first passage was better. The extended walk had sufficient overtrack, but was not relaxed enough. The transition to passage came too early. The second passage lacked collection and also in the piaffe the hindlegs did not move under the body. While the first part of Graves' ride did not have that edge the rider is known for, in the canter work she was able to pull up the score a bit more with some delightful movements. The two and one tempi changes were world class, the zig zag was well ridden. The extended canter was too conservative. The pirouettes were lovely but the first one could have been even smaller. The passage on the centerline was more active, but in the piaffe at X the horse got very tight behind. The last passage did not look as together and the halt at G came too early. Throughout the horse was soft and steady in the contact. They still scored an 80.109% and had 78.152% as low score from Ringmark (5th place)  and 82.174% as high score from judge Clarke who had them first. Danish Daniel Bachmann Andersen and the 15-year old KWPN stallion Blue Hors Zack (by Rousseau x Jazz) continued their shooting star path and are climbing up and up on the ladder. They exceeded the expectations by finishing third on the board ahead of the expected third place-getter Kasey Perry-Glass. Zack's trot extensions were energetic but a bit rushed. The passage was soft and elegant, the first piaffe could have been more on the hindlegs and up in the frame. The extended walk was well ridden and the collected walk nice.  The horse gets a bit busy with the tail in the passage but showed good articulation off the ground. The rider leant much to the left for the canter strike off. The two tempi changes were huge, but could even be more uphill oriented. The extended canter was big but the horse anticipated the flying change and did it on his own account before K. The one changes were big as well, with the ones to the right having more scope than the ones to the left. The pirouettes were small. The transition down to trot came a bit abrupt. The final passage was very expressive, the piaffe at X nice and soft but a bit forward. The last bit of passage was a bit laboured and uneven, but overall the ride was well executed. They scored 78.152%.

American Kasey Perry-Glass and her 16-year old Danish bred Gorklintgaards Dublet (by Diamond Hit x Ferro) landed fourth place after an eye-pleasing, soft ride. The first extended trot was solid, the half passes were very regular though the ones to the right more elastic and rhythmical. The rein back was not as polished. Dublet's first passage was even and off the ground, but in the piaffe he slightly crept forward. The extended walk had good relaxation and just enough overstep although the four beat rhythm could be more articulated. The transitions in and out of the piaffe were very nice but the also the second piaffe was a bit too much forward despite a very comfortable, easy going rhythm. Dublet performed super steady one and two tempi changes. The extended canter could have been ridden more full out on the diagonal. The zig zag was effortless even though the right side of the mouth began to open a bit and the horse licked his lips. The left pirouette was slightly big, but the right one was very well ridden and small. The third trot extension was not entirely regular as the rider asked for more engagement from behind. The final passage towards X was lovely with the piaffe also better in the spot; the last stretch of passage was very expressive but the horse lost a bit of the regularity in its expression. They scored 77.267% with individual scores going from 74.130% to 79.348%.

Helen Langehanenberg and Louise Leatherdale's 17-year old Hanoverian stallion Damsey (by Dressage Royal x Ritual) placed fifth. The dark bay stallion produced powerful trot extensions, a tiny bit hurried. There was good crossing of the legs in the half passes to the right, the left ones a tiny bit less elastic. In the rein back the horse dragged his feet a bit. In the first passage and piaffe there could have been a bit more engagement from behind. The extended walk is world class, but the nose could reach a fraction more out. There was atiny jog in the collected walk as the horse anticipated the passage. The second passage was not entirely even and in the piaffe the horse lost the rhythm one step but overall it was nicely ridden. The two tempi changes were secure, the canter extension uphill and powerful. In the zig zag the half passes to the right covered more ground than the left. The pirouettes were small and nicely collected on the hindlegs. The final passage was engaged and active but with the hindquarters slightly to the right. The piaffe at X had good impulsion yet was one step forward.In the final passage towards G the horse got uneven behind though which resulted in a lack of finish in the final halt. Nevertheless Langehanenberg achieved a very secure round and scored 76.957%.

Patrik Kittel and the Oatley family's 13-year old Oldenburg gelding Delaunay (by Dr. Doolittle x Feinbrand) went into sixth place. The bay gelding started with a good trot extension and the nose reaching forward, but lost a bit of scope at the end of the trot half pass to the right. The rein back was laboured as the horse was not entirely submissive.  The passage was nice but not always as regular and collected throughout the movement. The piaffe was well on the spot but the left hind was back stepping. The third piaffe at X was the better one. The horse looked confident in the canter work with clean tempi changes and a good zig zag, but overall the uphill tendency needs to be developed more. They scored 76.304%

Emmelie Scholtens and Ad Valk's KWPN stallion Apache (by UB40 x Krack C) slotted in seventh. The trot extensions had much push but were slightly rushed. The passage was lightfooted, the piaffe active but could be even more confident and regular in the rhythm. The horse easily achieved overtrack in the extended walk but the relaxation and stretch over the topline were not sufficient. The extended canter had much go, but the horse can still lengthen more in the frame. The zig zag was very nicely ridden. The tempi changes were clean. The pirouettes were nice and tight but the right one could have had more bending round the inside leg. They scored 75.745%.

Hans Peter Minderhoud and Gaston Glock's 11-year old KWPN stallion Dream Boy (by Vivaldi x Ferro) came to Sweden as the winners of the London qualifier and they placed eighth in the Grand Prix in Gothenburg. The black stallion showed improvement in the piaffe but he is still seeking the balance as he get wide in front. They scored 75.326%. Adrienne Lyle and Betsy Juliano's Hanoverian stallion Salvino (by Sandro Hit x Donnerhall) tied in 8th place on 75.326%.

For those who couldn't make it to Gothenburg and who relied on the paid service of FEI TV for the World Cup Finals' experience, were in for a cold shower as technical difficulties disturbed the broad cast throughout, dropping on several riders such as Hans Peter Minderhoud, Adrienne Lyle. This is not the first time that FEI TV fails to deliver at major Championships, where no alternatives for streaming are available. Last year in Paris, the drag crew ran over the cable and the feed for the majority of the Grand Prix class didn't happen.

The 2019 World Cup Finals will be decided in the Kur to Music on Saturday afternoon 6 April 2019.