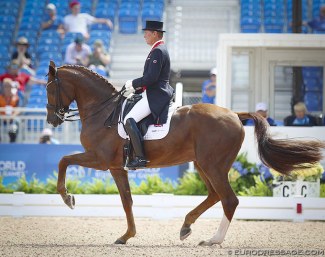 Up and coming young dressage rider Theodora Livanos can look forward to a new, highly talented horse in her stable: Dono di Maggio.

The 12-year old Oldenburger gelding Dono Di Maggio (by Dimaggio out of Fenea (by Santander H)) has been acquired Equester Mountain Enterprises Ltd., a company owned by Lara Livanos and her two daughters, which has previously purchased the experienced Grand Prix horse Robinvale from Hof Kasselmann.

Like Robinvale, Dono Di Maggio has moved to Switzerland under the care of experienced trainers Christian Pläge and Birgit Wientzek-Pläge.

The goal for the new combination is of course a qualification for the Olympic Games in Tokyo 2020 and in Dono Di Maggio the young rider will have a proven Championship contender under her saddle.

Dono di Maggio competed in the 2018 FEI World Equestrian Games in Tryon with Hof Kasselmann rider and trainer Emile Faurie. The pair contributed to the Bronze medal of the British dressage team. The elegant chestnut gelding was born in 2007 and bred by Gabriele Heinisch. He was first shown by Borja Carrascosa at Intermediaire level and then began his international Grand Prix career under Emile Faurie. The pair celebrated their biggest successes last year at the CDI4* in Fritzens, the CDI3* in Bolesworth and in the CDI3* in Aachen. Faurie especially appreciated the gelding’s talent for piaffe and passage, which were regularly awarded 9s and 10s by the judges.

"We are delighted that Dono Di Maggio will go to a fantastic new home,” says managing director Ulli Kasselmann.

Francois Kasselmann confirms, “Theodora Livanos is a promising young rider and the pair has a great future ahead of them as they pursue their ambitions in Grand Prix and the Olympic games We are looking forward to seeing them out and about at competitions soon.”

The 18-year-old Grecian Livanos has already enjoyed great success with EME’s stable of horses; For Compliment, Fido Dido and Winston at CDI-J and CDI-Y level, including a 5th place at the 2017 European Junior Riders Championships in Roosendaal as well as winning three gold medals at the 2016 Balkan Games.