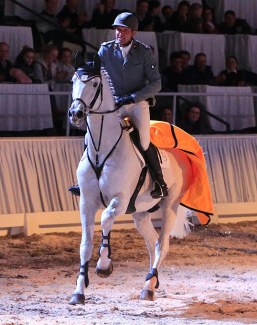 At the Verden Spring Elite Auction on 13 April 2019, Grey Top was awarded the Grande Prize. The Celle State Stud stallion is a prime example of the valuable Hanoverian G-blood.

Unfortunately the once highly coveted G-line is completely dying out in German horse breeding. Graf Top is one of the few remaining G-line stallions still passing on the G-blood through the sire line. There is no longer a G-line dressage stallion standing at stud.

5G - even better, even more powerful. This applies not only to mobile communication, but also to the powerful grey stallion Grey Top. His paternal line leads via Graf Top, Graf Grannus, Grannus and Graphit directly to the eponym of the Grande Prize. In addition, Grey Top has five times the Hannover's legendary producer of jumpers, Gotthard in his pedigree. In addition, there is a highly successful dam line, which originally came from Holstein. These are the ingredients that made the typey premium stallion of the Verden licensing 2009 the highly esteemed Grande Prize winner 2019.

Grey Top was born at Emiliano Lonzi's in Fauglia Pisa, Italy. He is a full brother of the Linn Zakariasson’s internationally successful mare, Graf Magna, who was already successful in 1.55 metre classes in the year of Grey Top's licensing. Their dam Silver Dream achieved a top placing  in the free jumping competition for offspring from the Hanoverian Jumper Breeding Program in Verden as a three-year-old and then moved to Italy. At the stallion sales, the Celle State Stud was acquired Grey Top, who immediately enjoyed great popularity among breeders. In his performance test he not only confirmed his enormous jumping talent also under the rider, but he also convinced with good rideability and elastic basic gaits. Already at the age of four he collected his first ribbons with Joachim Winter in novice (A) and elementary (L) level tests for young show jumpers. One year later his first foals were sold at auctions in Verden. The first licensed sons also come from his first crop. One of them is Gunfire PJ (breeder: Pferdezucht Dr. Jacobs GbR, Bierbergen), who became Hanoverian Jumper Champion at the age of five and is currently collecting ribbons with Pato Muente on the Sunshine Tour in Spain. One of Gunfire PJ's vintage companions is Gentleman FRH (breeder: Annette and Detlef Schelhas, Lage). The double Bundeschampion of eventing horses and rider Sandra Auffarth fascinate almost every time they perform. Also last year Grey Top provided a Hanoverian Show Jumping Champion. Hann.Pr.A. Glücklich (breeder: Peter Wisch, Otterndorf) won the four-year-old class. As of 2013 Heiko Tietze from the Celle State Stud has ridden Grey Top and already one year later they won their first S-placement. The great grey horse has been confirming this performance season after season with a high degree of reliability. Accordingly Heiko Tietze enthuses: "Grey Top is an absolute reliable horse and he always wants to do everything right. In the right proportion he is robust and honest."

Grey Top's sons and daughters are very welcome at the Verden auctions. Over 60 of his offspring have been knocked down at the Verden auctions, and over 60 times a new owner was happy about "his" Grey Top. Seven stallions have been licensed so far, and more than every third of the registered mares has been awarded at shows. Grey Top's breeding values are at a high level right from the start, and this applies not only to the jumping values, but also to the conformation. This is not an unimportant statement for the breeding of long-term successful, modern sport horses. Grey Top entered the breeding stage in connection with the G-Initiative. He is a particularly valuable representative of this bloodline, which he combines in a high concentration. And he is a worthy Grande Prize winner, from whom a lot can still be expected.

With the Grande-Prize the Hannoveraner Verband honours Grey Top's merits in breeding, because the Grande-Prize is awarded to the breeder of a stallion who, with his first offspring under the rider, gives hope to positively influence Hanoverian breeding.