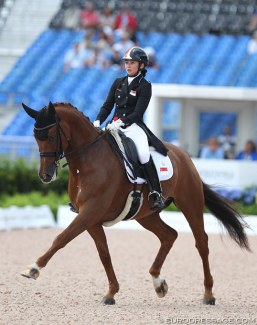 Riding the gorgeous Tribiani he earned a mark of 68.19% to claim sixth place in Friday’s highly competitive Grand Prix, a class won by Germany’s Jessica Von Bredow-Werndl and Zaire-E (75.82%). The German contender went on to head Saturday night’s Grand Prix Freestyle too, with the British pair producing a stylish kür for 72.05% and fifth amongst hot company.

Tribiani’s last competition outing was at the FEI World Equestrian Games™ in Tryon last September where he wore the Singapore flag with his usual rider and Matt’s pupil Caroline Chew who takes the reins back later this week for Wiener Neustadt CDI4* near Vienna.

“The last time Tribiani competed was at WEG with Caroline,” said Matt. “He’s flown a lot recently so it was good for him to have a nice big break. I rode him at Ebreichsdorf to get him back in the ring, to give him his first competition outing after his holiday, and now Caroline will start her campaign to qualify for Tokyo next year.”

Talking about the gorgeous ‘Joey’, Matt said; “He’s such a lovely horse and always produces a consistent test. There were a couple of mistakes in the Grand Prix but for his first time competing after a break, I’m very happy with him.”

Describing their Star Wars-themed freestyle programme, Matt said; “It was a relatively easy one before, but this one is more high impact. It has double pirouettes, piaffe turns, and it really allows me to show the horse’s strengths. I really enjoy riding to it.”

Tribiani was bought as a nine year old from Denmark by Caroline’s parents Tony and Melanie Chew as a Small Tour horse for their daughter. “They won silver at the Southeast Asian Games, he took to Grand Prix in the autumn of that year, and he hasn’t looked back.

“Caroline is a full-time lawyer working in London and she rides at the weekends; I’m 6’4’’ and she’s 5’6’’; but he [Joey] copes with us both so well. Caroline is good at receiving instructions and trusting me. It’s a system that works. It’s a good team.”

Talking about the Solos Landtinus x Landandel gelding, Matt added; “He’s a kind, pleasant horse. He’s very easy-going but you can light him up and get some fantastic expression. He’s very normal too, he hacks, goes in the field and is lovely to have around.”