Oldenburg Licensing Champion Benefit Not to Stand at Stud in 2019 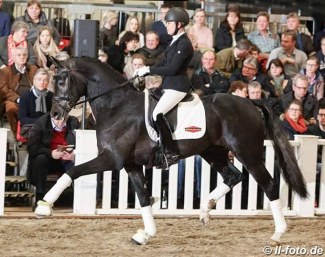 Benefit, the 2017 Oldenburg Licensing Champion by Belantis x Sir Tender, will not be standing at stud in 2019.

The 4-year old grey stallion, who is based in Germany at Böckmann's station, will not be able to compete in the mandatory stallion sport test this year to keep his licensed status.

Benefit sold at the licensing auction in 2017 for 600,000 euro to Swedish Antonia Ax:son Johnson, but in the German FN database the horse is listed as owned by Böckmann.

In 2018 Johnson decided to leave Benefit in Germany with Böckmann where he would be for his first breeding season and trained by Sandra Kötter. He became the high scoring stallion at the 14-day Stallion Performance Testing which was held in Schlieckau on 4 - 17 April 2018, but so far has never competed in sport.

For 2019 Benefit would have to do the sport test, but will be unable to because of an injury.

Two more of Böckmann's 4-year old stallions, A Dream Comes True (by Apache x Furstenball) and Dieu de l'Amour (by De Niro x San Amour) are pulled from breeding because they can't do the testing because of an injury.

Benefit's first crop of foals is due this year.