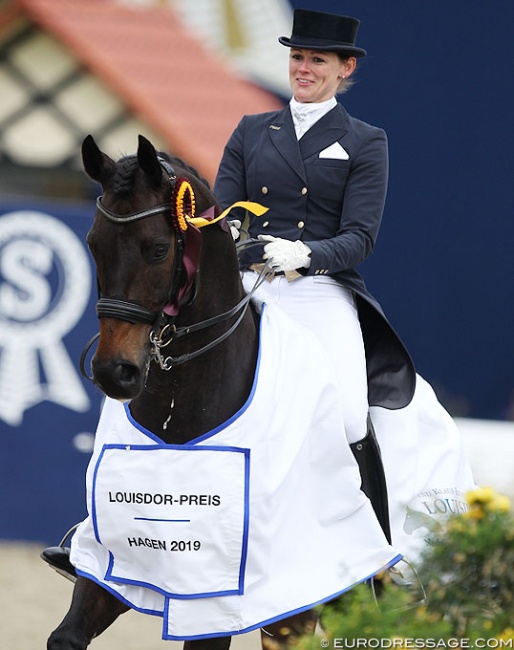 Senta Kirchhoff and the 9-year old L'Arbuste became the clear winners of the national Louisdor Cup qualifier for Developing Grand Prix horses held at the 2019 CDI Hagen on Sunday 28 April 2019.

The Horses & Dreams competition CDI/CSI at Hof Kasselmann is the outdoor season opener in Germany and aside from hosting a stellar big tour and a large small tour, it also annually provides the setting for the first German qualifier for the Nurnberger Burgpokal (Developing PSG Horse) and Louisdor Cup (Developing GP Horse).

For the Louisdor Cup qualifier 26 combinations were entered for the warm up round in Hagen on Friday 26 April. The top 12 of the warm up class moved on to the final round on Sunday.

The Menden based Senta Kirchhoff and the Oldenburg gelding L'Arbuste (by Skovens Rafael x Zardin Firfod) were a league of their own. They convincingly won the warm up round (Intermediaire II) with 73.789% and went on to post a whopping 76.814% on the board in the actual finals' qualifier. The modern gelding stood out with his engaged hindleg and athleticism, scope in trot and canter and his very good extended walk. He has a passage with much airtime. The piaffes are good and would have even more scoring potential if the horse took more weight on the hindquarters.

Bred by Morten Plenborg at stuteri Firfod in Denmark, L'Arbuste is owned by Senta and her life partner Henri Ruoste's company Equeco. Senta already rode the horse in the finals at the 2017 World Young Horse Championships in Ermelo, but she was on a baby break in 2018.

"I knew I had a top horse. I'm just so proud of him the way he presented himself," said a beaming Senta who was moved to tears.

Hubertus Schmidt and the 9-year old Westfalian stallion Bonamour (by Bonifatius x Rousseau) landed second place in the finals on 72.605%. In the warm up round the chestnut stallion, who is owned by Korean Olympian Dong Seon Kim, placed seventh with 70.500%.

"You can truly rely on him and he has a genial character," said Schmid after securing a ticket for the Louisdor Cup finals in December alongside Kirchhoff. "He's my favourite horse when it comes to his temperament. Here he showed all that he can up till now and I'm happy that it worked out so well."

Ingrid Klimke and the 9-year old Oldenburg gelding Bluetooth OLD (by Bordeaux x Riccione) ended in third place with 72.186%. The pair came from a ninth place in the warm up round with 70.184%. Owned by Elena Knyaginicheva who purchased the horse at the 2013 PSI Auction for 1 million euro, Bluetooth was very nice in all three extended gaits. Klimke had much control on the horse which is a testimony to his obedience and rideability. In the piaffes he still gets a bit wide behind and the passage could show more engagement but they are on their way.

Spanish Borja Carrascosa probably presented the most beautiful horse of the pack: the gorgeous liver chestnut Bordeaux' Barolo (by Bordeaux x Munchhausen) owned by Alida Abrar. The combination was fourth with 71.395% after placing second in the warm up with 71.289%. The 9-year old Westfalian stallion has an impressive passage which is very regular and rhythmical. In piaffe he is still timid and pulls the hocks up and out a bit. The two tempi changes should improve on straightness but the ones look good.

Jessica von Bredow-Werndl and Beatrice Burchler-Keller's 10-year old Hanoverian gelding Ferdinand BB (by Florencio x Lanciano) finished fifth with 71.023% after placing sixth in the warm up round with 70.632%. In the first round the sympathetic bay gelding was too passagey in the collected trot work and did not show sufficient overtrack in the extensions. The passage was nice and floaty and the piaffe is almost there but still travels forward.

Eurodressage photographed all riders at the CDI Hagen. If you are interested in photos for social media or prints, email us!