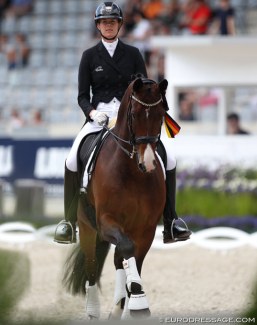 Kastar came into training with Jorinde Verwimp as a 5-year old. They made their CDI debut at the 2017 CDI Saumur in the 7-year old division and won the Belgian Young Horse Championships for 7-year olds. In the autumn of 2017 they moved to international small tour level. From 2017 through 2019 the pair competed at numerous CDI's at small tour level, including Roosendal, Compiegne, Mechelen, Lier, Den Bosch, Aachen, Waregem, Mechelen, and Sint Truiden. The past year they never scored below 70% and most recently they won the Inter I kur to Music at the 2019 CDI Sint-Truiden with77.625%.

Originally it was meant for Ludo's wife Veronique Philippaerts-Engelen, a small tour rider in her own right, to take over the ride, but the horse has now been sold to the U.S.A.

Eliane came to try out Kastar, who is also known as "Taki", two weeks ago and immediately clicked. The horse will move to Tristan Tucker's stable in Holland first before shipping to the U.S.A. Tucker and Cordia have been long-time collaborators. Eliane owns Jewel Court Stud in Wuustwezel, Belgium, but is permanently based in the U.S.A., splitting her time between Florida and Connecticut.

"It's been a wonderful journey with him the past four years. He came as a 5-year old jumping horse and look where we are today, we competed at so many beautiful shows with score's far over 70%," said Verwimp. "He is one of the sweetest and most work willing horses I've ever trained. Thank you for the amazing times, I really enjoyed every ride with you! I will miss you Taki."