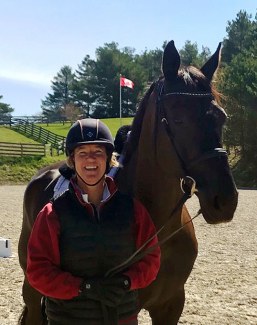 Te Amo comes from the first crop of foals that Totilas produced and is bred by the U.K. based Mitzi Stillebroer. Edward Gal is credited for deciding the name of the horse, fiding his inspiration in the eponymous Rihanna song.

As a 2-year old colt he sold at the 2013 Equine Elite auction for 20,000 euro to lawyer Stephan Wensing and John Brouwer.

Te Amo QOS was licensed in The Netherlands with the AES studbook as the first ever approved Totilas offspring. The stallion was gelded, though, to be focused on sport and started by French Grand Prix rider Sebastien Duperdu.

Wensing and Brouwer sold the youngster to a sponsor of Dutch Grand Prix rider Jean-Rene Luijmes and last year the horse stood in training with Laurens van Lieren.

Te Amo has now sold to Canada and is trained by Jacqueline Brooks.

"I’ll start showing him soon," Brooks told Eurodressage. "I’ll start him third level, but he is training pretty much everything. He moves more like the Donnerhall side, but is uphill like his papa. I really love riding him. Will just have to see what the judges think."