Anabel Balkenhol and Heuberger No Longer a Combination 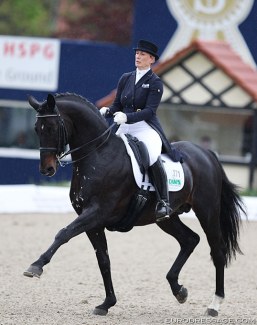 Anabel Balkenhol no longer makes a combination with her number one Grand Prix horse Heuberger. The stallion's owner, the Erdsiek family of Gestut Webelsgrund, has decided to end the collaboration.

Heuberger is a 12-year old licensed Trakehner stallion by Imperio out of Heubluemchen (by Michelangelo).

He was first competed by Maxi Kira von Platen as a 4-year old in 2011. In 2012 Sarah-Maria Schöttke took on the ride and in 2013 it was Iris Werner's turn on board the stallion.  In 2014, five and a half years ago, the black stallion came into training with Anabel Balkenhol in Rosendahl, Germany.

The past few years Heuberger had been on the market, but a sale did not materialize. The owner picked up Heuberger in Rosendahl on Thursday 23 May 2019.

Team Balkenhol took to Facebook today about Heuberger's departure: "Thanks for the last five and a half years with lots of ups and a couple of downs. We're going to miss you a lot, in the morning at 6 there is no one who screams because he wants his food first. We don't get any bruises because we are not quick enough to give you oranges, at 2.30 pm no one persists more to be the first in the field than you, and we don't have to run behind you in the field because you think it's too early to go back in the stable. We hope you bring your new rider/owner the same fun you brought us."

Anabel will continue her career with FEI horses Davinia la Douce, Crystal Friendship and High Five. One day after the announcement of the relocation of Heuberger, Balkenhol found out the horse was shipped to Helgstrand to be sold.