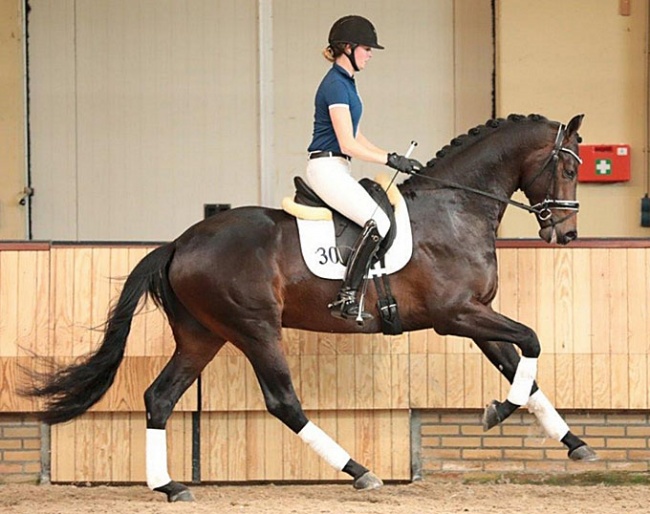 Livius became the high scoring stallion of the 2019 KWPN Spring Stallion Performance Testing which concluded in Ermelo, The Netherlands on 1 June 2019.

Livius (by Bordeaux x Vivaldi), originally named Livius Utopia and owned by Joop van Uytert, was the best scoring colt of the 50-day testing, finishing with 84.5 points in total.  The dark bay colt earned 8.5 for walk, 8 for trot, 8.5 for canter, suppleness and self carriage, 9 for rideability and 8.5 for potential.

"We were able to work well with the stallions during the testing. They all have much movement potential and were very rideable," said KWPN licensing committee chair Bert Rutten.

Livius was one of three colts who scored over 80 points, with a minimum standard of 75 points to pass the exam.

The second highest scoring colt was Ladignac (by Zonik x Apache) with 83.5 points. This colt is owned by breeder Nathalie Smeets who recently sold half to Joop van Uytert. He got 8.5 for walk, 8 for trot and canter, 8.5 for suppleness and self carriage, 9 for rideability and 8.5 for potential.

Lewis (by Grand Galaxy Win x Uphill), who was originally named Livingstone,  got 78 points. The same amount of points was scored by Toto's Design US (by Totilas x De Niro).