What is happening
What's Happening? 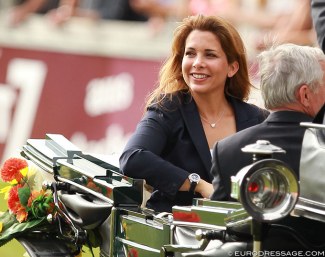 Multiple British media outlets broke this news yesterday evening, although there is disagreement of Haya's whereabouts: Germany or London.

The 45-year old Princess Haya fled with the help of a German diplomat to escape her husband of almost 15 years and seek a divorce.

Sheikh Mohammed, 69, is vice-president and prime minister of the United Arab Emirates, as well as leader of the Emirate of Dubai. He has six wives and 23 children.

He is also a major player in the horse racing business (Godolphin stables) and competed in endurance.  Endurance has become the scandal and bane of the FEI for its continuous reports of animal torture, corruption and fraud within the sport, mainly with participants from the Middle East as culprits and offenders.

Princess Haya has been a two-term FEI president. She was a member of the International Olympic Committee and appointee to the IOC's International Relations Committee.