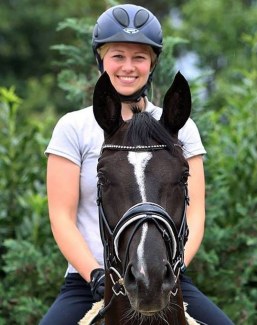 German dressage rider Jana Wolters discovered her 5-year old Oldenburg gelding suffered from stomach ulcers when he began looking unhappy, was no longer eager to go forward under saddle and started cribbing. Wolters tried the natural product Equine 74 Gastric and was blown away by the results.

Gastric ulcers are a common place problem for stabled horses. Wolters' gelding went through the mill as a 2.5 year old at the Stallion Licensing. According to her, the stress from an early and rushed upbringing was the beginning of stomach ulcers.

"He's a very sweet and calm horse and I could easily hack him out in canter as a 3-year old," Wolters explained. "However sometimes I had the feeling he was not truly calm, because indoors he wasn't really easy. He didn't really want to go forward to the leg, and when it also started happening outdoors , I knew something was wrong. Normally my horses are unstoppable outside."

Wolters became suspicious that her gelding might suffer from an unhealthy gut.

"I realized that he must have had much stress in the past. Born in May he was a young 2-year old when they started preparing him for the licensing. Maybe he was also weaned from his mom at an early age, and so on. He didn't spend much time in the field with his friends while being reared. When he started to crib I realized something was really wrong with his stomach. It looked like he didn't feel comfortable," said Wolters about the symptoms.

Jana knew immediately that the stomach was the problem based on her own gluten intolerance.

"I directly thought of a stomach problem, because of my own issues with gluten which I'm not allowed to eat," said Jana. "I recognized similar things between me and my horse and on top of that he started cribbing."

"Helle brought a package of Equine 74 Gastric with her to Germany at the end of 2018," Wolters reminisced. "I started to give my gelding the product and the result after just three days of feeding was that he was already a lot better and improved even more later."

"I discussed the feeding routine with my mom, who is a vet, and we agreed that on this horse in particular it made sense to combine both products for a short period of time as both are different in effect."

Jana realized that medication is no long-term solution. Equine 74 Gastric is a natural product which buffers stomach acids instead of just blocking them and it creates a healthy pH- balance in the horse's stomach. It is ideal for long-term ulcer management.

"If you have an ulcerated stomach it's good to use omeprazole also, but the best way is to protect your horse before it happens," Jana stated. "Therefore Equine 74 Gastric is the perfect product in my mind, because it is more natural and more healthy to protect the horses for the long term."

Jana's gelding has showed massive progress in the four months that Equine 74 Gastric has been included in his daily diet.

"After three days of feeding I observed the first differences," said Jana. "He was more relaxed in the box. Normally before feeding he would start to crib, did not allow us to touch him in the stomach area and overall was in a bad mood. He didn't want to go out of his box, didn't like me in his stall, but day by day he got better. The first day I went out for a hack he was already so much more happy to go. Instead of falling into trot after a few meters, he now loved cantering again and cruising around. I had to stop him. Indoors he was much more forward and his whole body position looked more soft and happy. Before, his stomach looked hard and pulled up. No wonder he didn't want to run or walk around!."

Jana has been able to keep her gelding in peak condition with Equine 74 Gastric, which is a safe and effective alternative to treat horses for recurring ulcers. She is now also considering to use it on a 1-year old colt who will be gelded soon.

"He will be gelded in the clinic, which is a very stressful situation for a young horse; to be away from his home and friends," she said. "I want to help him in this period of time with Equine 74 Gastric and again when he goes to his new home after his time in the field. I think it's important to help these youngsters with their stress management before ulcer problems develop."